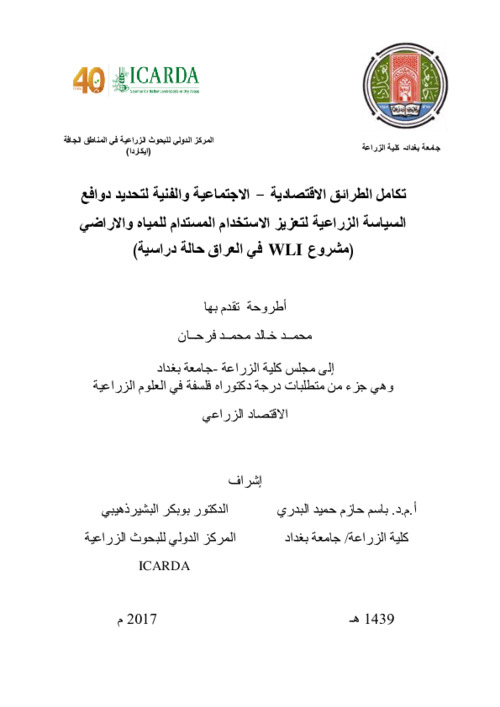 It is no doubt that water resource is considered as main determining factor for agriculture and the adoption of modern irrigation technique would preserve this important resource. The shortage of rain in middle and southern Iraq pushes farmers to depend on irrigated agriculture especially from its main resource Euphrates and Tigris and their tributaries. As the incoming water resource of these two rivers is decreasing continuously in Iraq, this would dictate that farmers should adopt modern irrigation technique which decrease the loss in water and improve the water productivity per area unit in addition to the role of these techniques in increasing productivity and decreasing production costs. To achieve the Iraqi ministry of agriculture in cooperation with the ICARDA applied a set of techniques in Iraq to solve this problem. Among those techniques is Sub-surface Drip Irrigation (SDI) technique which was applied on a group of cucumber farmers. The importance of this technique in developing agricultural sector and the shortage of knowledge regarding the factors affecting the adoption of this technique, it is necessary to study the reasons that make farmers do not adopt the technique. The objective of this study is to determine main factors that affect farmer's decisions to adopt the technique and the important factors in explaining farmer's decisions in study region (Abu Ghraib region) and to deduce results which may help in developing the intervention policies to encourage the technique adoption, The study consists of four chapters and an introduction, the first chapter contained two sections, the first one dealt with research methodology while the second one concentrated on literature review. The second chapter was the theoretical framework and it contained three sections, the first section explained the logistic regression for the most important factors affecting the adoption of (SDI). The second section dealt with Cost- Benefit Analysis (CBA), while the third section explained ADOPT analysis as a technique used to predict the adoption of the new agricultural techniques. The third chapter concentrated on the reality of agricultural production in Iraq, and it contained four sections, the first one the nature of production, area and yield of cucumber in Iraq and Baghdad province for the period (1990-2015) with reference to nutritional and economic importance of cucumber. The second section tackled the price trend of cucumber during the period (1990-2015), the third section dealt with the incoming water rater resource situation for Iraq in general and for Baghdad province in particular. Also it discussed the modern irrigation techniques and its role in agricultural sector development; it also shed light on the nature of (SDI) and its role in developing the cucumber farmer's income who applied the technique. The fourth section discussed the role of ICARDA in developing agricultural sector in Iraq. The fourth chapter concentrated on results and discussion and contained four sections; the first section dealt with social and economic characteristic of study sample, while the second section discussed the economic analysis of factors affecting the adoption of (SDI) technique by using logistic regression, the third section discussed the (CBA) for farmers adopting and for non-adopting farmers. The fourth section discussed the prediction of adopting (SDI) by farmers through using ADOPT program. It appears that economic and social variables had a big role in adopting (SDI) technique. The results showed that the variables; farmer age, farmer's education level, the source of information, gave level of significance to affect the adoption at 1% level of significance. The variables; the water source, profit expectation and cucumber price, showed significance to affect on the technique adoption at 5%level. The result of (CBA) showed that is economically feasible to use (SDI) technique through a number of indicators among them: net revenues as it amounted to I.D 4.5 million/ house in the case of the technique adoption, as it was higher than the net revenues in case of without using the technique which amounted to I.D 2.5 million/ house. The internal rate of return was 41.88% and return to cost ratio was 2.27% as it indicated that the invested dinar in (SDI) yields 2.27 dinars. The results of ADOPT program showed that it is expected that 95% of farmers will adopt the technique through time period of 15.5 years. The sensitivity analysis showed that this period could be decreased or increased through affecting some factors. The result showed that the adoption of (SDI) on a large scale would contribute in improving the farmer's standard of living and achieving part of development objectives in agricultural sector. According to results the study arrived at some conclusions and recommendations.

land and water use; socioeconomics