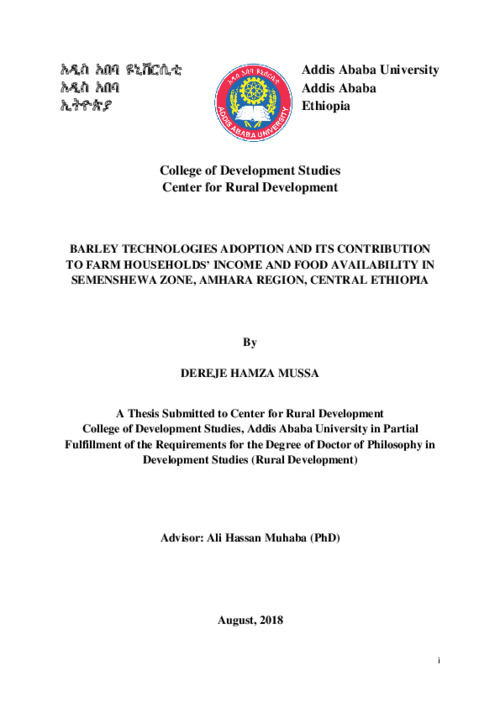 In Ethiopia, more than 80% of people are living in rural areas. They directly or indirectly relied on agriculture (mainly on crops and livestock production) for their livelihoods. Crop agriculture includes cereals, pulses, oil crops, vegetables and others. Among cereals, barley is the one widely produced in the highlands of the country for the farm households’ food and income. Semen Shewa Zone (Amhara Region) is one of the highland areas of the country where barley is widely produced. Barley in Ethiopia ranks fourth to fifth in area coverage and production among the major cereals that include (teff, wheat, maize, sorghum and barley). In the highlands of Ethiopia in general, and in Semen Shewa Zone, in particular, barley is produced during main rainy season (Meher/Kiremt), during small rainy season (Belg), and using irrigation. It has various purposes and benefits for the farm households that include, its grain for food and income, its straw for livestock feed and for construction and plastering of house walls by mixing it with mud, and its stem for house roofs thatching. It is produced with and without using improved agricultural technologies. However, studies are scarce in identifying the determinants to use/adopt or not to use/not to adopt improved agricultural technologies in barley production and the contributions of adoption in farm households’ income and food availability as well as the roles of farmers’ perception towards extension service in adoption of improved technologies, in enhancing farm households’ income and food availability. As a result, this study was designed and conducted in the selected woredas (Ankober, Basona, and Angollela) of Semen Shewa Zone to fill these knowledge gap and come up with evidence based information that can be used by policy makers, development practitioners and researchers. This study conducted in nine rural kebeles selected from the three selected woredas. For this study, 812 respondents (604 male and 208 female) 36 FGD participants were selected and used for quantitative and qualitative data collection respectively. The econometrics models that include Multivariate probit, ordered and binary logit, Censored Tobit and multiple linear regression models were used in addition to descriptive statistics. The likelihoods of adoption of barley technologies estimation using multivariate probit model showed that frequent plow likelihood adoption was 74%, fertilizer 72%, compost 56%, frequent hand weeding 47%, weedicide 42%, farm land drainage 27% and improved barley seed 20%; and the likelihoods of joint adoption and joint rejection of all technologies by all sample HHs were 5% and 2% respectively. Furthermore, farm land size, food availability status, income status, credit access, extension service, barley selling options, improved livestock, affected fertilizer adoption positively and significantly; while credit center distance, and participation in Belg production were affected negatively and significantly. In addition, the descriptive analysis showed the income and food availability statuses. As a result, out of (812) sample households, 49% were with equal and above (3781 Eth. Birr.) minimum income threshold; and 65.52% were with equal and above (2550Kcal) minimum food availability threshold. Regarding the perception level, 24.14% were with low, 6.53% with medium, and 69.33% were with high perception level towards the importance and roles of agricultural extension service to enhance adoption, barley yield, food availability and income of farm HHs. In FGDs, high cost inputs, poor quality of inputs and high credit interest rate were among the most limiting factors affecting adoption, low income and food availability statuses of HHs.