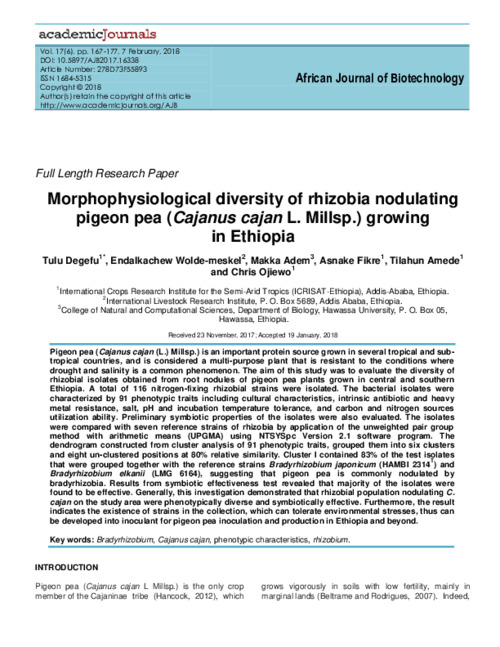 Pigeon pea (Cajanus cajan (L.) Millsp.) is an important protein source grown in several tropical and subtropical countries, and is considered a multi-purpose plant that is resistant to the conditions where drought and salinity is a common phenomenon. The aim of this study was to evaluate the diversity of rhizobial isolates obtained from root nodules of pigeon pea plants grown in central and southern Ethiopia. A total of 116 nitrogen-fixing rhizobial strains were isolated. The bacterial isolates were characterized by 91 phenotypic traits including cultural characteristics, intrinsic antibiotic and heavy metal resistance, salt, pH and incubation temperature tolerance, and carbon and nitrogen sources utilization ability. Preliminary symbiotic properties of the isolates were also evaluated. The isolates were compared with seven reference strains of rhizobia by application of the unweighted pair group method with arithmetic means (UPGMA) using NTSYSpc Version 2.1 software program. The dendrogram constructed from cluster analysis of 91 phenotypic traits, grouped them into six clusters and eight un-clustered positions at 80% relative similarity. Cluster I contained 83% of the test isolates that were grouped together with the reference strains Bradyrhizobium japonicum (HAMBI 2314T) and Bradyrhizobium elkanii (LMG 6164), suggesting that pigeon pea is commonly nodulated by bradyrhizobia. Results from symbiotic effectiveness test revealed that majority of the isolates were found to be effective. Generally, this investigation demonstrated that rhizobial population nodulating C. cajan on the study area were phenotypically diverse and symbiotically effective. Furthermore, the result indicates the existence of strains in the collection, which can tolerate environmental stresses, thus can be developed into inoculant for pigeon pea inoculation and production in Ethiopia and beyond.