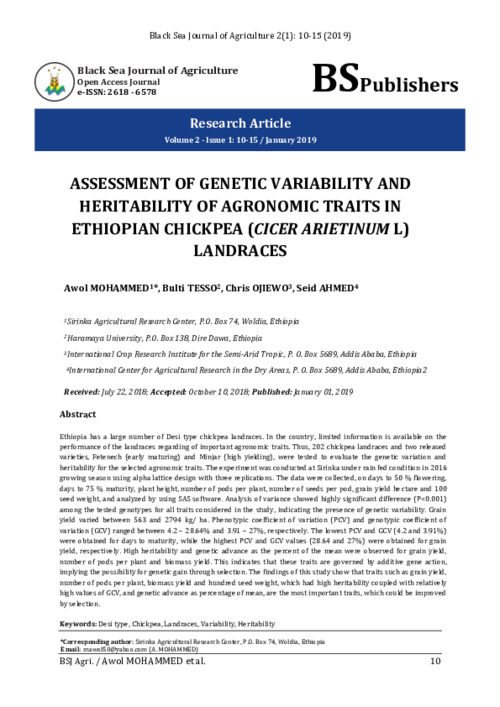 Ethiopia has a large number of Desi type chickpea landraces. In the country, limited information is available on the performance of the landraces regarding of important agronomic traits. Thus, 202 chickpea landraces and two released varieties, Fetenech (early maturing) and Minjar (high yielding), were tested to evaluate the genetic variation and heritability for the selected agronomic traits. The experiment was conducted at Sirinka under rain fed condition in 2016 growing season using alpha lattice design with three replications. The data were collected, on days to 50 % flowering, days to 75 % maturity, plant height, number of pods per plant, number of seeds per pod, grain yield hectare and 100 seed weight, and analyzed by using SAS software. Analysis of variance showed highly significant difference (P<0.001) among the tested genotypes for all traits considered in the study, indicating the presence of genetic variability. Grain yield varied between 563 and 2794 kg/ ha. Phenotypic coefficient of variation (PCV) and genotypic coefficient of variation (GCV) ranged between 4.2 – 28.64% and 3.91 – 27%, respectively. The lowest PCV and GCV (4.2 and 3.91%) were obtained for days to maturity, while the highest PCV and GCV values (28.64 and 27%) were obtained for grain yield, respectively. High heritability and genetic advance as the percent of the mean were observed for grain yield, number of pods per plant and biomass yield. This indicates that these traits are governed by additive gene action, implying the possibility for genetic gain through selection. The findings of this study show that traits such as grain yield, number of pods per plant, biomass yield and hundred seed weight, which had high heritability coupled with relatively high values of GCV, and genetic advance as percentage of mean, are the most important traits, which could be improved by selection.