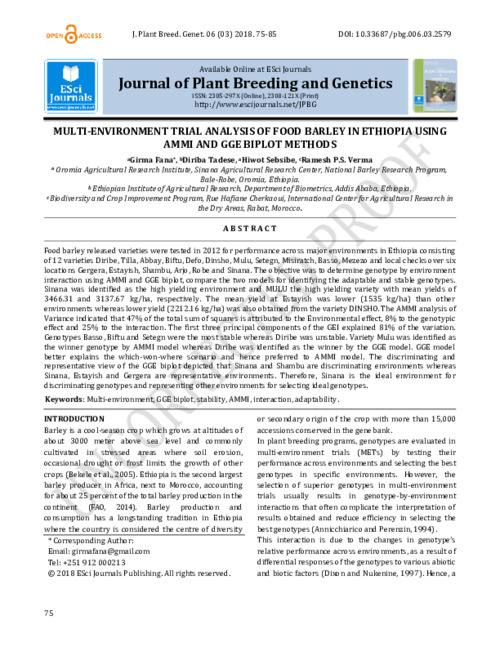 Food barley released varieties were tested in 2012 for performance across major environments in Ethiopia consisting of 12 varieties Diribe, Tilla, Abbay, Biftu, Defo, Dinsho, Mulu, Setegn, Misiratch, Basso, Mezezo and local checks over six locations Gergera, Estayish, Shambu, Arjo, Robe and Sinana. The objective was to determine genotype by environment interaction using AMMI and GGE biplot, compare the two models for identifying the adaptable and stable genotypes. Sinana was identified as the high yielding environment and MULU the high yielding variety with mean yields of 3466.31 and 3137.67 kg/ha, respectively. The mean yield at Estayish was lower (1535 kg/ha) than other environments whereas lower yield (2212.16 kg/ha) was also obtained from the variety DINSHO. The AMMI analysis of Variance indicated that 47% of the total sum of squares is attributed to the Environmental effect, 8% to the genotypic effect and 25% to the interaction. The first three principal components of the GEI explained 81% of the variation. Genotypes Basso, Biftu and Setegn were the most stable whereas Diribe was unstable. Variety Mulu was identified as the winner genotype by AMMI model whereas Diribe was identified as the winner by the GGE model. GGE model better explains the which-won-where scenario and hence preferred to AMMI model. The discriminating and representative view of the GGE biplot depicted that Sinana and Shambu are discriminating environments whereas Sinana, Estayish and Gergera are representative environments. Therefore, Sinana is the ideal environment for discriminating genotypes and representing other environments for selecting ideal genotypes.