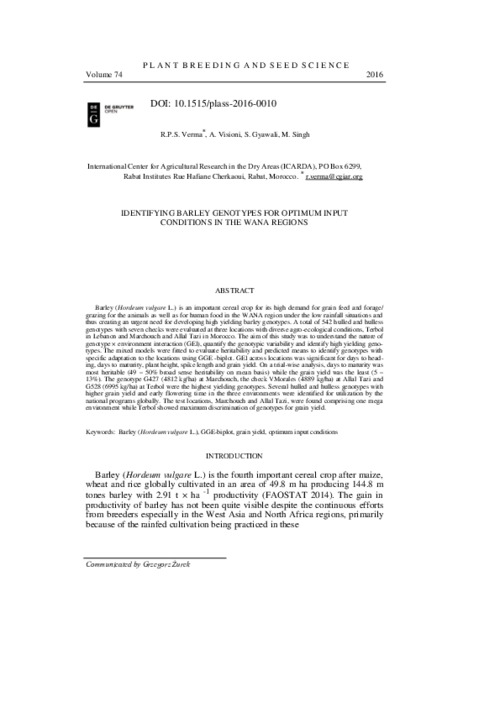 Barley (Hordeum vulgare L.) is an important cereal crop for its high demand for grain feed and forage/ grazing for the animals as well as for human food in the WANA region under the low rainfall situations and thus creating an urgent need for developing high yielding barley genotypes. A total of 542 hulled and hulless genotypes with seven checks were evaluated at three locations with diverse agro-ecological conditions, Terbol in Lebanon and Marchouch and Allal Tazi in Morocco. The aim of this study was to understand the nature of genotype × environment interaction (GEI), quantify the genotypic variability and identify high yielding genotypes. The mixed models were fitted to evaluate heritability and predicted means to identify genotypes with specific adaptation to the locations using GGE -biplot. GEI across locations was significant for days to heading, days to maturity, plant height, spike length and grain yield. On a trial-wise analysis, days to maturity was most heritable (49 – 50% broad sense heritability on mean basis) while the grain yield was the least (5 – 13%). The genotype G427 (4812 kg/ha) at Marchouch, the check VMorales (4889 kg/ha) at Allal Tazi and G528 (6995 kg/ha) at Terbol were the highest yielding genotypes. Several hulled and hulless genotypes with higher grain yield and early flowering time in the three environments were identified for utilization by the national programs globally. The test locations, Marchouch and Allal Tazi, were found comprising one mega environment while Terbol showed maximum discrimination of genotypes for grain yield.