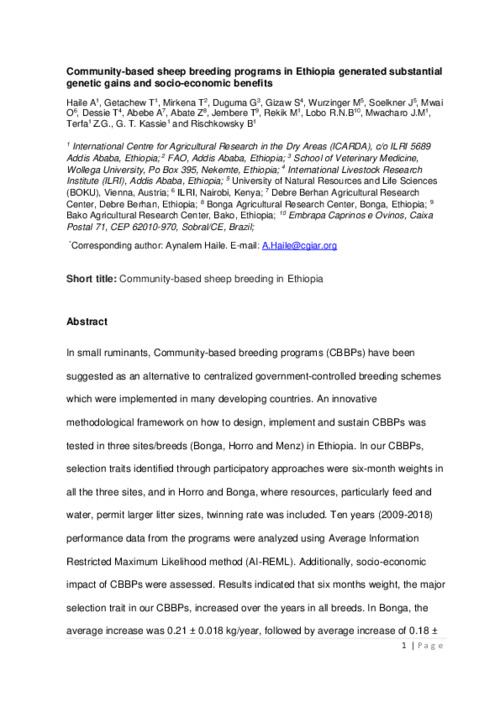 In small ruminants, Community-based breeding programs (CBBPs) have been suggested as an alternative to centralized government-controlled breeding schemes which were implemented in many developing countries. An innovative methodological framework on how to design, implement and sustain CBBPs was tested in three sites/breeds (Bonga, Horro and Menz) in Ethiopia. In our CBBPs, selection traits identified through participatory approaches were six-month weights in all the three sites, and in Horro and Bonga, where resources, particularly feed and water, permit larger litter sizes, twinning rate was included. Ten years (2009-2018) performance data from the programs were analyzed using Average Information Restricted Maximum Likelihood method (AI-REML). Additionally, socio-economic impact of CBBPs were assessed. Results indicated that six months weight, the major selection trait in our CBBPs, increased over the years in all breeds. In Bonga, the average increase was 0.21 ± 0.018 kg/year, followed by average increase of 0.18 ± 0.007kg/year in Horro and 0.11 ± 0.003 kg/year for Menz. This is quite substantial in an on-farm situation. The birth weight of lambs has not improved over the years in Bonga and Horro sheep. In Menz, there is significant increase. Given that we have not selected for birth weight in the community flocks we did not expect genetic change. However, there could have been a positive effect through correlated responses which was not the case in Bonga and Horro sheep. In Horro and Bonga sheep, where twinning rate was one of the selection traits, litter size increased over the years: 15.4% in Bonga and 11.6% in Horro. This increase combined with the increased six months body weight has increased income (20 percent) and farm-level meat consumption (from slaughter of one sheep per year to three). The results show that CBBPs are technically feasible, result in measurable genetic gains in performance traits and impact on the livelihood of farmers.