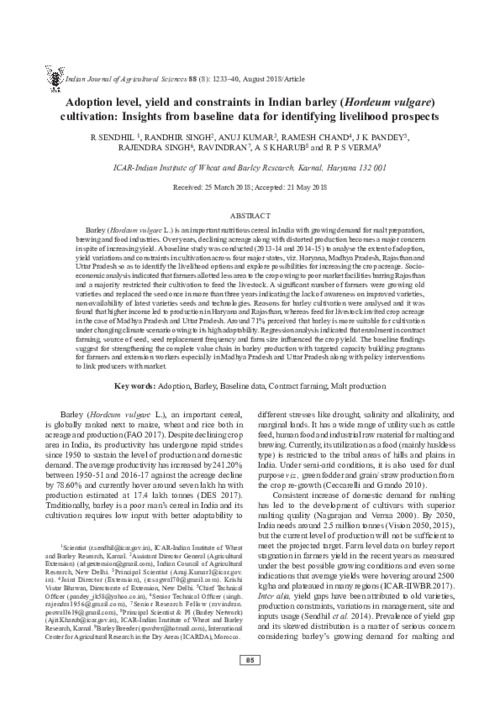 Barley (Hordeum vulgare L.) is an important nutritious cereal in India with growing demand for malt preparation, brewing and food industries. Over years, declining acreage along with distorted production becomes a major concern in spite of increasing yield. A baseline study was conducted (2013-14 and 2014-15) to analyse the extent of adoption, yield variations and constraints in cultivation across four major states, viz. Haryana, Madhya Pradesh, Rajasthan and Uttar Pradesh so as to identify the livelihood options and explore possibilities for increasing the crop acreage. Socioeconomic analysis indicated that farmers allotted less area to the crop owing to poor market facilities barring Rajasthan and a majority restricted their cultivation to feed the livestock. A significant number of farmers were growing old varieties and replaced the seed once in more than three years indicating the lack of awareness on improved varieties, non-availability of latest varieties seeds and technologies. Reasons for barley cultivation were analysed and it was found that higher income led to production in Haryana and Rajasthan, whereas feed for livestock invited crop acreage in the case of Madhya Pradesh and Uttar Pradesh. Around 71% perceived that barley is more suitable for cultivation under changing climate scenario owing to its high adaptability. Regression analysis indicated that enrolment in contract farming, source of seed, seed replacement frequency and farm size influenced the crop yield. The baseline findings suggest for strengthening the complete value chain in barley production with targeted capacity building programs for farmers and extension workers especially in Madhya Pradesh and Uttar Pradesh along with policy interventions to link producers with market.