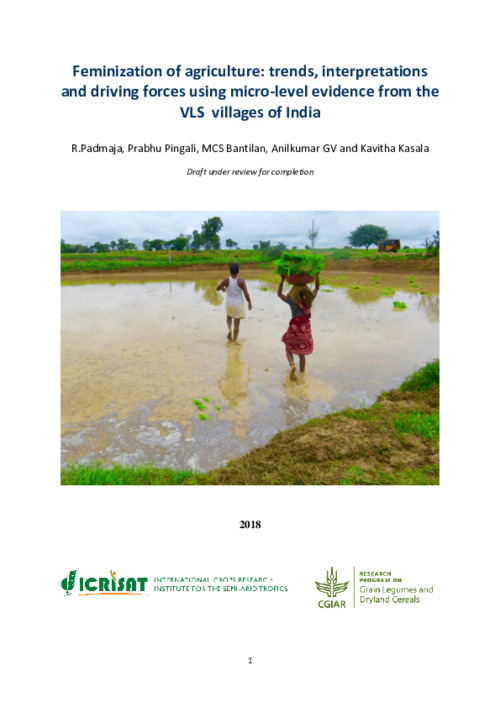 There is a growing recognition of the phenomenon of increasing feminization of agriculture but the causes, consequences and the extent varies by region and this is not fully understood. The central argument of this paper is that increased number of women into agriculture – both as producers and or labor- is bought about by technological change, changes in cropping pattern and diversification of income sources including rural out migration. All of these lead to change in the traditional gender division of farm work. The objective of this paper is to examine women’s and men’s time use patterns, and labor participation in agriculture over time and the implications of these changes for policy to achieve gender equality. Such evidence assumes greater significance in the harsh, vulnerable environments such as the semi-arid tropics of India and Africa which are facing acute water shortage, continuous drought as well as a policy bias towards rain fed agriculture, and a prevalence of rigid gender, social and cultural norms dictating women. The paper uses micro-level evidences from the longitudinal panel surveys carried out by ICRISAT’s Village Dynamics Studies in South Asia (VDSA), formerly called as Village-level Studies (VLS), which has been running from 1975 to now, tracking the same households and individuals over time in selected villages of India. The descriptive statistics and analysis of the data from the 6 villages of the semi-arid tropics (SAT) confirms the assumption and argument that women play multiple roles and spend time on several activities including productive work – both farm, non- and off-farm, domestic work and other reproductive work like child and family care. Compared to men, women spend four times more time on domestic activities and in the care economy – taking care of all the members of the household including children, the elderly as well as sick members. A focus on time spent in agriculture and related activities, the analysis informs us that women spend almost double the number of hours per hectare on agriculture activities either on their own farms or as paid labor. Sowing, weeding, harvesting continue to be the dominant activities for which women spend about 75-80% of their time in agriculture. The analysis also indicates that in the event of rising wages in the rural areas, women (especially family female) substitute for male labor and perform activities performed by men. The time-use analysis and the changing cropping patterns in the rural areas of the SAT confirm that activities performed by men are mechanized, freeing them from agriculture into other farm or non-farm activities, including migration to towns and cities. The activities that women perform dominantly on the crops that continue to be grown in these areas are not mechanized, women participate more in agriculture due to migration of the economically active men and sometimes women and hence there is seen a progressive feminization of agriculture in these regions. Technological empowerment, unmediated control and ownership of land, enhancing of agricultural management skills and knowledge of women in agriculture are ways by which agricultural production could be improved thus bringing about gender equality.