Impact Assessment of Chickpea Research and Development in Ethiopia 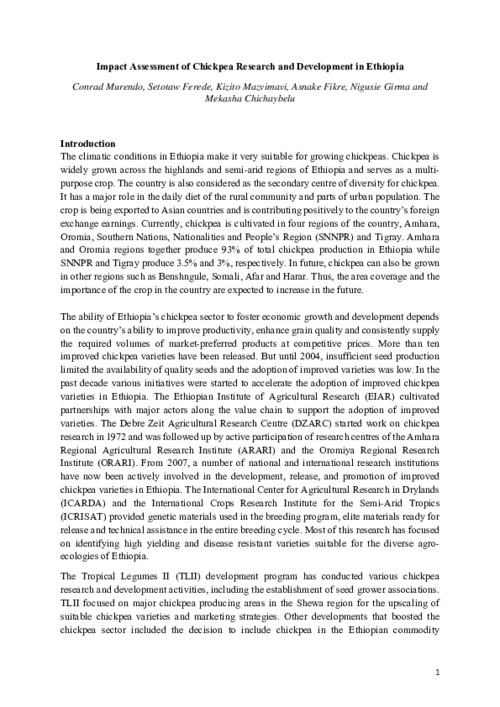 The climatic conditions in Ethiopia make it very suitable for growing chickpeas. Chickpea is widely grown across the highlands and semi-arid regions of Ethiopia and serves as a multi-purpose crop. The country is also considered as the secondary centre of diversity for chickpea. It has a major role in the daily diet of the rural community and parts of urban population. The crop is being exported to Asian countries and is contributing positively to the country’s foreign exchange earnings. Currently, chickpea is cultivated in four regions of the country, Amhara, Oromia, Southern Nations, Nationalities and People’s Region (SNNPR) and Tigray. Amhara and Oromia regions together produce 93% of total chickpea production in Ethiopia while SNNPR and Tigray produce 3.5% and 3%, respectively. In future, chickpea can also be grown in other regions such as Benshngule, Somali, Afar and Harar. Thus, the area coverage and the importance of the crop in the country are expected to increase in the future.