Characteristics of maize cultivars in Africa: How modern are they and how many do smallholder farmers grow? 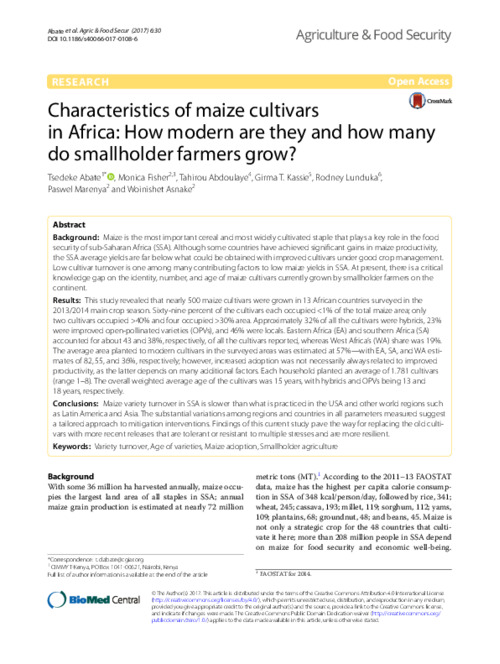 Background: Maize is the most important cereal and most widely cultivated staple that plays a key role in the food security of sub-Saharan Africa (SSA). Although some countries have achieved significant gains in maize productivity, the SSA average yields are far below what could be obtained with improved cultivars under good crop management. Low cultivar turnover is one among many contributing factors to low maize yields in SSA. At present, there is a critical knowledge gap on the identity, number, and age of maize cultivars currently grown by smallholder farmers on the continent. Results: This study revealed that nearly 500 maize cultivars were grown in 13 African countries surveyed in the 2013/2014 main crop season. Sixty-nine percent of the cultivars each occupied <1% of the total maize area; only two cultivars occupied >40% and four occupied >30% area. Approximately 32% of all the cultivars were hybrids, 23% were improved open-pollinated varieties (OPVs), and 46% were locals. Eastern Africa (EA) and southern Africa (SA) accounted for about 43 and 38%, respectively, of all the cultivars reported, whereas West Africa’s (WA) share was 19%. The average area planted to modern cultivars in the surveyed areas was estimated at 57%—with EA, SA, and WA estimates of 82, 55, and 36%, respectively; however, increased adoption was not necessarily always related to improved productivity, as the latter depends on many additional factors. Each household planted an average of 1.781 cultivars (range 1–8). The overall weighted average age of the cultivars was 15 years, with hybrids and OPVs being 13 and 18 years, respectively. Conclusions: Maize variety turnover in SSA is slower than what is practiced in the USA and other world regions such as Latin America and Asia. The substantial variations among regions and countries in all parameters measured suggest a tailored approach to mitigation interventions. Findings of this current study pave the way for replacing the old cultivars with more recent releases that are tolerant or resistant to multiple stresses and are more resilient.