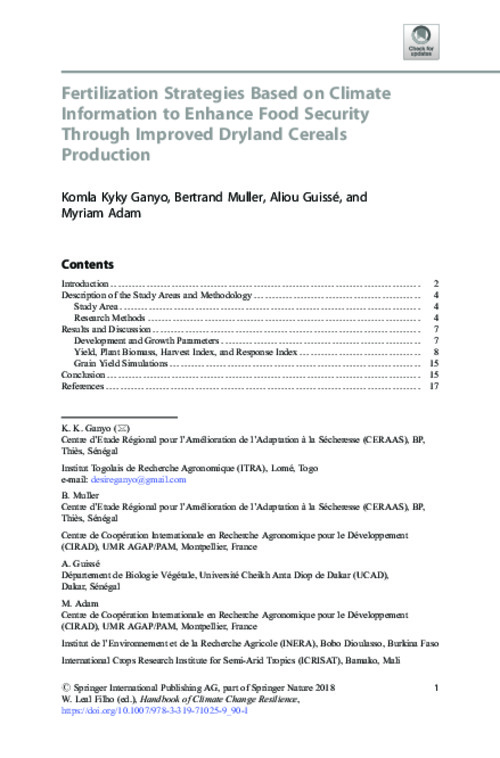 Rainfall uncertainty and nutrient deficiency affect sorghum production in Sahel. This study aimed at (i) determining the responses (varieties*water*nitrogen) of various West-African sorghum (Sorghum bicolor L. Moench) varieties to the application of fertilizer (NPK and urea) at selected growing stages according to water regime (irrigated or not, different rainfall patterns) and (ii) simulating them to define alternative fertilization strategies. This chapter proposes alternative fertilization strategies in line with rainfall patterns. Split plot experiments with four replications were carried out in two locations (Senegal), with four improved sorghum varieties (Fadda, IS15401, Soumba and 621B). Treatments were T1, no fertilizer; T2 = 150 kg/ha of NPK (15-15-15) at emergence +50 kg/ha of urea (46%) at tillering +50 Kg/ha of urea at stem extension; T3 = half rate of T2 applied at the same stages; T4 = 150 kg/ha of NPK + 50 kg/ha of urea at stem extension +50 kg/ha of urea at heading, and T5 = half rate of T4 applied at the same stages. Plant height, leaf number, grain yield, and biomass were significantly affected by the timing and rate of fertilizers. Grain yield were affected by water*nitrogen and nitrogen*variety interactions. It varied from 2111 to 261 kg/ha at “Nioro du Rip” and from 1670 to 267 kg/ha at “Sinthiou Malème”. CERES-Sorghum model overestimated late fertilizer grain yields. To achieve acceptable grain yield, fertilizers application should be managed regarding weather.