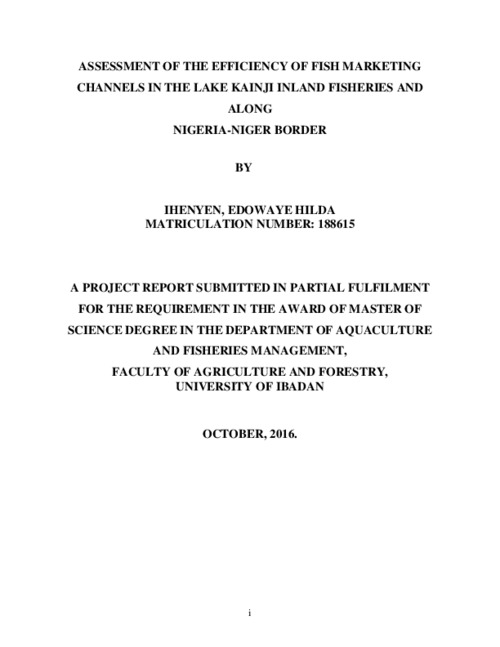 Hilda Ihenyen. (14/10/2016). Assessment of the Efficiency of Fish Marketing Channels in the Lake Kainji Inland Fisheries and along Nigeria-Niger Border.

Improvement of food, nutritional security and poverty reduction in Africa can be addressed through better integration of intra-regional fish trade into the nation-state policy agenda. Data crucial to the development of regional fish trade needs to be obtained. However, there is paucity of information on market structure, products and value of fish trade along regional borders in Africa. This study therefore investigated fish marketing structure, the marketing actor’s characteristics, fish distribution channels, market profitability and efficiency along the Nigeria-Niger border and Lake Kainji inland fisheries. A multistage sampling procedure was used in the selection of respondents for this study. Random sampling was carried out in selecting four states Sokoto, Katsina, Jigawa and Yobe along the Nigeria-Niger border, Niger state was purposively selected based on its location in the Lake Kainji inland fisheries. Data was collected from 150 respondents in each of the states comprising 50 producers, processors and marketers each , amounting to 750 with the use of a structured questionnaire. Data on socio-economic characteristics, marketing operations, marketing channel, market structure, profitability and trade flow were obtained. Data were analysed using descriptive statistics, budgetary indices, gini coefficient, linear regression, Stochastic production frontier model and ANOVA at α0.05. There was a predominance of male producers, marketers and processors in Katsina (100.0%, 98.0%, 98.0%), while in Niger state, processors were dominated by women (54.0%). Majority of producers (36.0%), processors (40.0%) in Sokoto state, marketers (36.0%) and processors (53.0%) in Katsina state; and processors (50.0%) in Niger were within the age of 31-40 years. The producer-consumer channel had an efficiency of 618.47 while that for producer-retailer-consumer channel was 435.85. The minimum and maximum average volume (kg) of fish traded within and across the States were for fried (882.25±339.15, 730.72±283.39) and fresh fish (1702.23±978.32; 1673.20±439.88). An average volume (kg) traded of 1386.46±760.57 for dried fish was traded across the regional border. 478.22±292.01 and 91.04±80.53 were the highest and least marketing efficiency among artisanal fishermen and retailers respectively for fresh fish. Processors had the highest average gross margin per kg (₦1157.94±492.26) while wholesalers had the least ₦387.94±363.87 for smoked fish. The Gini coefficient value for most of the actors showed partial inequality in the revenue distribution of fresh, smoked, dried, fried, spiced and frozen fish, except for wholesalers of smoked fish (0.34), retailers of spiced fish (0.45) and iii wholesalers (0.41) and retailers (0.43) of frozen fish. The linear regression b values for all the forms of fish were positive except for dried and fried whose b values were -7.66 and -5.15 respectively. The direct marketing channels were most efficient for fresh and processed fish. The market structures for most of the producers (capture), marketers and processors were monopolistic in nature and there was barrier into entry for fried and dried fish. Therefore there is need for better organization of fish markets.