Characteristics of the BMP7 Promoter in Hu Sheep 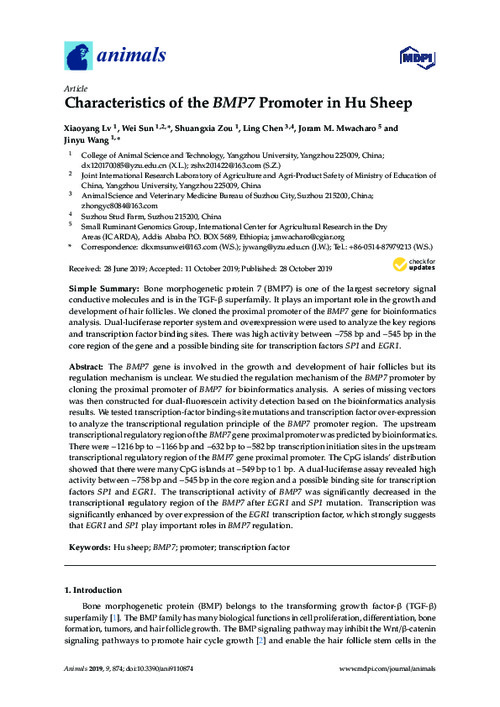 The BMP7 gene is involved in the growth and development of hair follicles but its regulation mechanism is unclear. We studied the regulation mechanism of the BMP7 promoter by cloning the proximal promoter of BMP7 for bioinformatics analysis. A series of missing vectors was then constructed for dual-ﬂuorescein activity detection based on the bioinformatics analysis results. Wetestedtranscription-factorbinding-sitemutationsandtranscriptionfactorover-expression to analyze the transcriptional regulation principle of the BMP7 promoter region. The upstream transcriptionalregulatoryregionoftheBMP7geneproximalpromoterwaspredictedbybioinformatics. Therewere−1216bpto−1166bpand−632bpto−582bptranscriptioninitiationsitesintheupstream transcriptionalregulatoryregionoftheBMP7geneproximalpromoter. TheCpGislands’distribution showed that there were many CpG islands at−549 bp to 1 bp. A dual-luciferase assay revealed high activity between−758 bp and−545 bp in the core region and a possible binding site for transcription factors SP1 and EGR1. The transcriptional activity of BMP7 was signiﬁcantly decreased in the transcriptional regulatory region of the BMP7 after EGR1 and SP1 mutation. Transcription was signiﬁcantly enhanced by over expression of the EGR1 transcription factor, which strongly suggests that EGR1 and SP1 play important roles in BMP7 regulation.