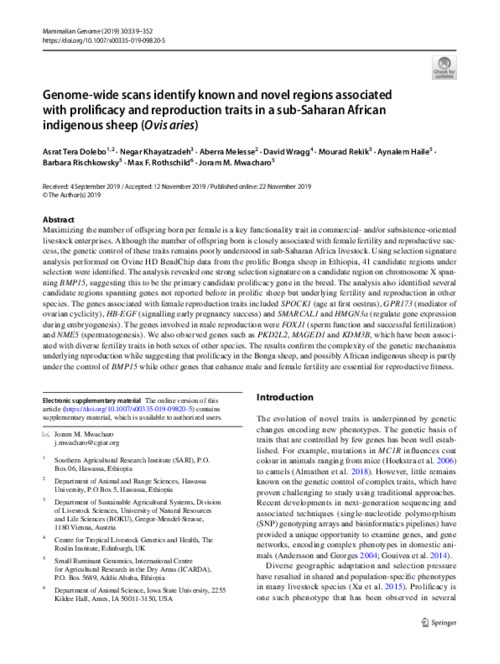 Maximizing the number of ofspring born per female is a key functionality trait in commercial- and/or subsistence-oriented livestock enterprises. Although the number of ofspring born is closely associated with female fertility and reproductive success, the genetic control of these traits remains poorly understood in sub-Saharan Africa livestock. Using selection signature analysis performed on Ovine HD BeadChip data from the prolifc Bonga sheep in Ethiopia, 41 candidate regions under selection were identifed. The analysis revealed one strong selection signature on a candidate region on chromosome X spanning BMP15, suggesting this to be the primary candidate prolifcacy gene in the breed. The analysis also identifed several candidate regions spanning genes not reported before in prolifc sheep but underlying fertility and reproduction in other species. The genes associated with female reproduction traits included SPOCK1 (age at frst oestrus), GPR173 (mediator of ovarian cyclicity), HB-EGF (signalling early pregnancy success) and SMARCAL1 and HMGN3a (regulate gene expression during embryogenesis). The genes involved in male reproduction were FOXJ1 (sperm function and successful fertilization) and NME5 (spermatogenesis). We also observed genes such as PKD2L2, MAGED1 and KDM3B, which have been associated with diverse fertility traits in both sexes of other species. The results confrm the complexity of the genetic mechanisms underlying reproduction while suggesting that prolifcacy in the Bonga sheep, and possibly African indigenous sheep is partly under the control of BMP15 while other genes that enhance male and female fertility are essential for reproductive ftness.