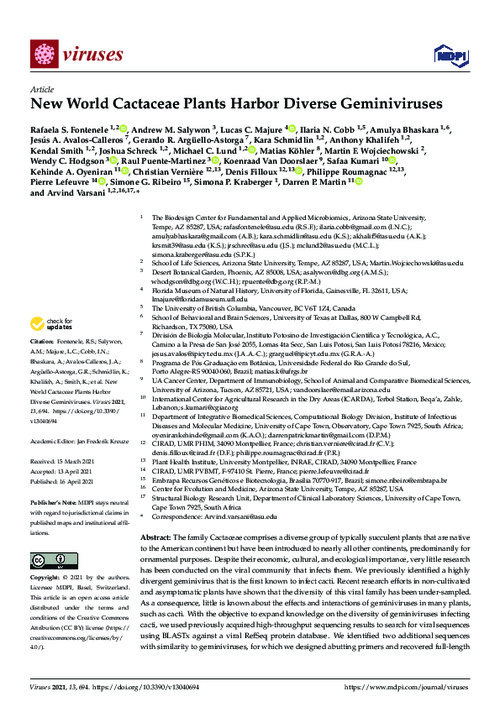 The family Cactaceae comprises a diverse group of typically succulent plants that are native to the American continent but have been introduced to nearly all other continents, predominantly for ornamental purposes. Despite their economic, cultural, and ecological importance, very little research has been conducted on the viral community that infects them. We previously identified a highly divergent geminivirus that is the first known to infect cacti. Recent research efforts in non-cultivated and asymptomatic plants have shown that the diversity of this viral family has been under-sampled. As a consequence, little is known about the effects and interactions of geminiviruses in many plants, such as cacti. With the objective to expand knowledge on the diversity of geminiviruses infecting cacti, we used previously acquired high-throughput sequencing results to search for viral sequences using BLASTx against a viral RefSeq protein database. We identified two additional sequences with similarity to geminiviruses, for which we designed abutting primers and recovered full-length genomes. From 42 cacti and five scale insects, we derived 42 complete genome sequences of a novel geminivirus species that we have tentatively named Opuntia virus 2 (OpV2) and 32 genomes of an Opuntia-infecting becurtovirus (which is a new strain of the spinach curly top Arizona virus species). Interspecies recombination analysis of the OpV2 group revealed several recombinant regions, in some cases spanning half of the genome. Phylogenetic analysis demonstrated that OpV2 is a novel geminivirus more closely related to viruses of the genus Curtovirus, which was further supported by the detection of three recombination events between curtoviruses and OpV2. Both OpV2 and Opuntia becurtoviruses were identified in mixed infections, which also included the previously characterized Opuntia virus 1. Viral quantification of the co-infected cactus plants compared with single infections did not show any clear trend in viral dynamics that might be associated with the mixed infections. Using experimental Rhizobium-mediated inoculations, we found that the initial accumulation of OpV2 is facilitated by co-infection with OpV1. This study shows that the diversity of geminiviruses that infect cacti is under-sampled and that cacti harbor diverse geminiviruses. The detection of the Opuntia becurtoviruses suggests spill-over events between viruses of cultivated species and native vegetation. The threat this poses to cacti needs to be further investigated.