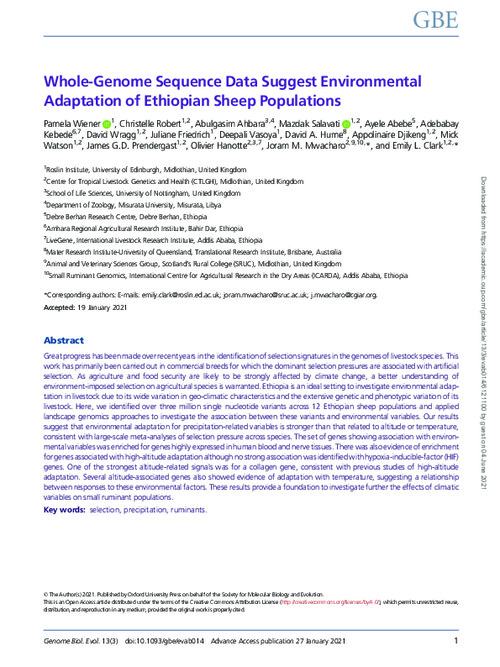 Great progress has been made over recent years in the identification of selection signatures in the genomes of livestock species. This work has primarily been carried out in commercial breeds for which the dominant selection pressures are associated with artificial selection. As agriculture and food security are likely to be strongly affected by climate change, a better understanding of environment-imposed selection on agricultural species is warranted. Ethiopia is an ideal setting to investigate environmental adaptation in livestock due to its wide variation in geo-climatic characteristics and the extensive genetic and phenotypic variation of its livestock. Here, we identified over three million single nucleotide variants across 12 Ethiopian sheep populations and applied landscape genomics approaches to investigate the association between these variants and environmental variables. Our results suggest that environmental adaptation for precipitation-related variables is stronger than that related to altitude or temperature, consistent with large-scale meta-analyses of selection pressure across species. The set of genes showing association with environmental variables was enriched for genes highly expressed in human blood and nerve tissues. There was also evidence of enrichment for genes associated with high-altitude adaptation although no strong association was identified with hypoxia-inducible-factor (HIF) genes. One of the strongest altitude-related signals was for a collagen gene, consistent with previous studies of high-altitude adaptation. Several altitude-associated genes also showed evidence of adaptation with temperature, suggesting a relationship between responses to these environmental factors. These results provide a foundation to investigate further the effects of climatic variables on small ruminant populations.