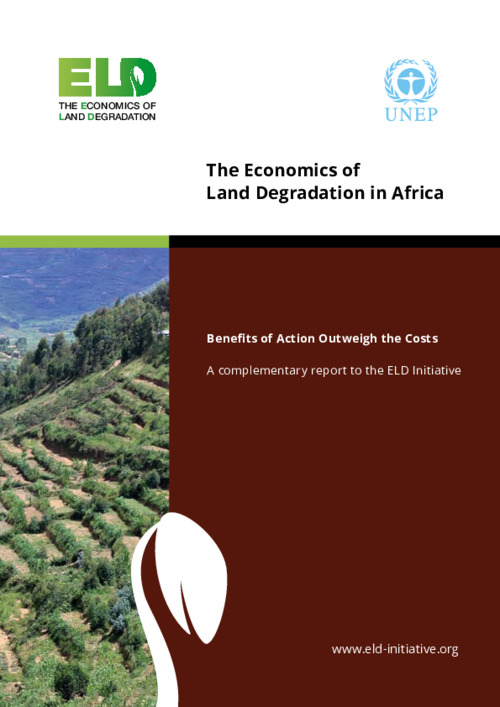 Land degradation and desertification are among the biggest environmental challenges of our time. In the last 40 years, we lost nearly a third of the world’s arable farmland due to erosion, just as the number of people to be fed from it almost doubled. That’s why the UN General Assembly declared 2015 as the International Year of Soils. And the good news is that this new report shows that while Africa remains the most severely a«ected region, the benefit of taking action across the continent outweighs the cost of implementing it: not just by a little, but by a factor of seven. Land degradation and desertification, including soil erosion, are made worse by climate change and the poor management of agricultural exports. This has serious implications for Africa and for those dependent on the 97 % of global food supply coming from terrestrial ecosystems. In other words: anybody who eats. Desertification already a«ects between a third and a half of the Africa’s land area to some degree. Yet, this report shows that an additional 280 million tonnes of cereal crops could be produced every year, simply by preventing human induced soil erosion. This would be a significant leap towards increasing food security and national income, while reducing food import costs and poverty. Gathering solid scientific data on these developments is crucial to progress and this report leverages one of the first studies of its kind, focusing on soil erosion and crop productivity on over 100 million hectares of crop lands across 42 African countries. It provides the base line for the much needed imperial data gathering in the next 15 years. It shows that failure to act could impact over 12 % of Gross Domestic Product. And, above all, it makes a credible economic and humanitarian case for Africa to achieve a number of Sustainable Development Goals. That’s why I am proud that UNEP has been able to work with the Economics of Land Degradation Initiative supported by the GIZ / BMZ, the European Commission and other valued partners to bring this report to life. I would like to thank all of them for their dedication in bringing this work to light. I sincerely hope this will justify the much needed investments in sustainable land management, which are crucial to achieve the Sustainable Development Goals in the region and across the world.