Effect of the infection with the nematode Haemonchus contortus (Strongylida: Trichostrongylidae) on the haematological, biochemical, clinical and reproductive traits in rams 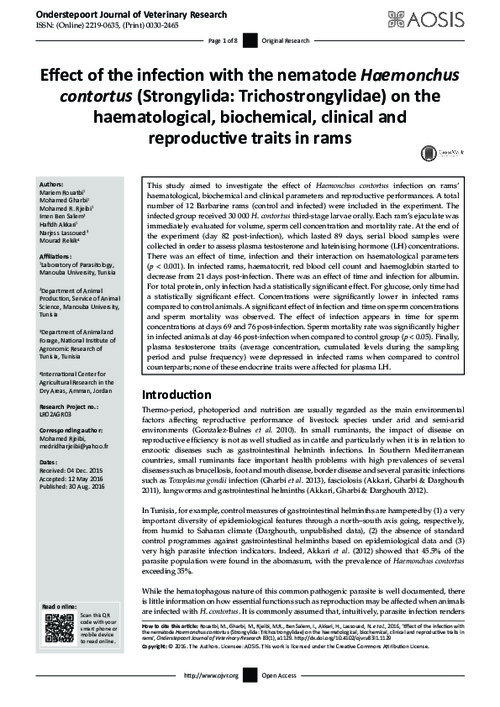 This study aimed to investigate the effect of Haemonchus contortus infection on rams’ haematological, biochemical and clinical parameters and reproductive performances. A total number of 12 Barbarine rams (control and infected) were included in the experiment. The infected group received 30 000 H. contortus third-stage larvae orally. Each ram’s ejaculate was immediately evaluated for volume, sperm cell concentration and mortality rate. At the end of the experiment (day 82 post-infection), which lasted 89 days, serial blood samples were collected in order to assess plasma testosterone and luteinising hormone (LH) concentrations. There was an effect of time, infection and their interaction on haematological parameters (p < 0.001). In infected rams, haematocrit, red blood cell count and haemoglobin started to decrease from 21 days post-infection. There was an effect of time and infection for albumin. For total protein, only infection had a statistically significant effect. For glucose, only time had a statistically significant effect. Concentrations were significantly lower in infected rams compared to control animals. A significant effect of infection and time on sperm concentrations and sperm mortality was observed. The effect of infection appears in time for sperm concentrations at days 69 and 76 post-infection. Sperm mortality rate was significantly higher in infected animals at day 46 post-infection when compared to control group (p < 0.05). Finally, plasma testosterone traits (average concentration, cumulated levels during the sampling period and pulse frequency) were depressed in infected rams when compared to control counterparts; none of these endocrine traits were affected for plasma LH.