Spatial and Temporal impacts of stone bunds on soil physical properties: a case study in the Northern Ethiopian Highlands 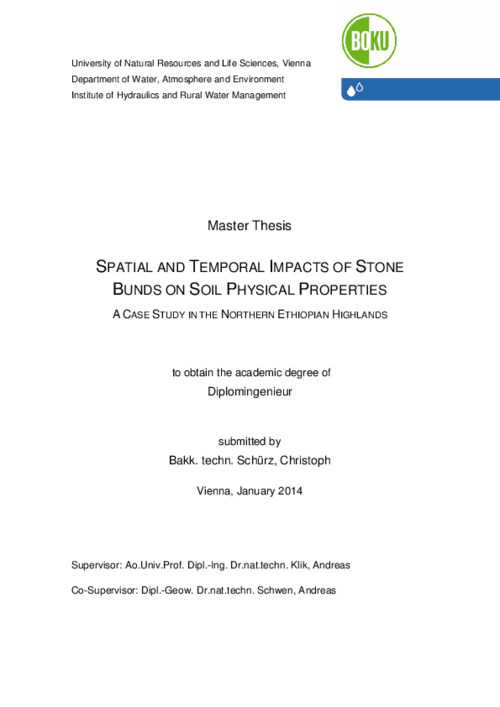 Central issue of rain fed agriculture systems in the Ethiopian highlands is to store rain water in the soil during the rainy season. The aim is to maximize plant available water and to reduce surface runoff and soil erosion. Stone bunds are a common practice for soil and water conservation, influencing the translation processes of surface runoff. However, changes in surface hydrology affect the temporal and spatial properties of soil physical parameters. The objective of this work is to find a relationship between the spatial distribution of soil properties and the location of the stone bunds, but also to monitor the temporal behavior of those soil parameters, to better understand the impact of stone bunds on soil water movement. The research area is located in the Gumara-Maksegnit watershed in Northern Ethiopia. There, two representative transects were selected: One transect crosses three fields with soil and water conservation measures applied perpendicular to them on a length of approximately 71 m. The second transect crosses the same hill slope in an area without conservation structures at a length of 55 m. During the rainy season in 2012 soil physical properties were monitored in specific spatial and temporal intervals. The measurements included bulk density, soil texture, and volumetric water content. Tension infiltration experiments were performed to determine saturated hydraulic conductivity for areas near stone bunds and the center of the fields on one hand, but also to derive soil water characteristics for the certain positions at the hill slope. Slope steepness and stone cover along the transects were assessed, using survey and photogrammetric analysis. The analyses that were used in this approach were able to reveal spatial and temporal characteristics of the assessed soil properties under the influence of stone bunds. For near surface volumetric water content a clear periodic behavior along the stone bunds was found, with significantly higher values in the vicinity of the stone bunds. Additionally, an early increase in water content over the rainy season was found for the transect with SWC. The bulk density showed significantly lower values in the zones where accumulation of sediment material takes place. Saturated hydraulic conductivity but also soil water characteristics show temporal changes but also spatial differences that are most likely induced by differences in soil structure. The strongest spatial relationship was found for inclination and near surface soil water content.