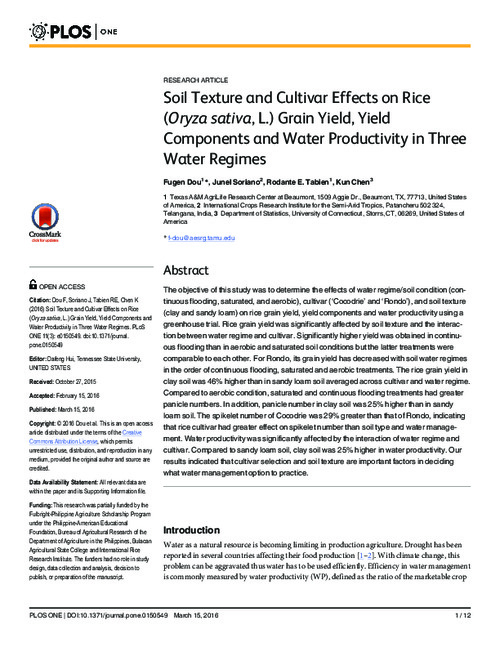 The objective of this study was to determine the effects of water regime/soil condition (continuous flooding, saturated, and aerobic), cultivar (‘Cocodrie’ and ‘Rondo’), and soil texture (clay and sandy loam) on rice grain yield, yield components and water productivity using a greenhouse trial. Rice grain yield was significantly affected by soil texture and the interaction between water regime and cultivar. Significantly higher yield was obtained in continuous flooding than in aerobic and saturated soil conditions but the latter treatments were comparable to each other. For Rondo, its grain yield has decreased with soil water regimes in the order of continuous flooding, saturated and aerobic treatments. The rice grain yield in clay soil was 46% higher than in sandy loam soil averaged across cultivar and water regime. Compared to aerobic condition, saturated and continuous flooding treatments had greater panicle numbers. In addition, panicle number in clay soil was 25% higher than in sandy loam soil. The spikelet number of Cocodrie was 29% greater than that of Rondo, indicating that rice cultivar had greater effect on spikelet number than soil type and water management. Water productivity was significantly affected by the interaction of water regime and cultivar. Compared to sandy loam soil, clay soil was 25% higher in water productivity. Our results indicated that cultivar selection and soil texture are important factors in deciding what water management option to practice.