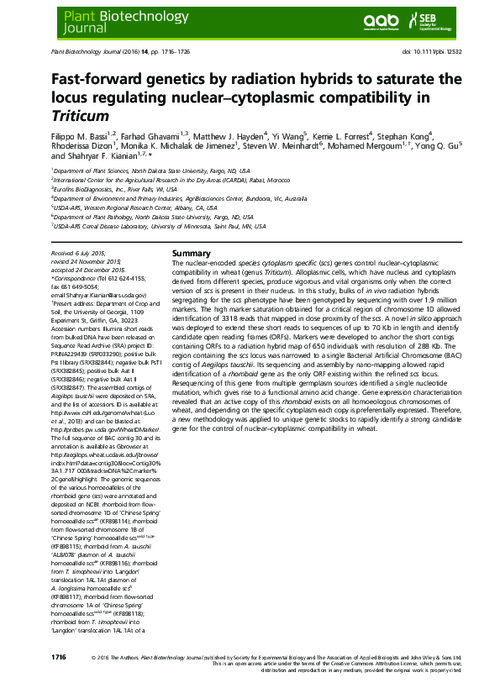 The nuclear-encoded species cytoplasm specific (scs) genes control nuclear–cytoplasmic compatibility in wheat (genus Triticum). Alloplasmic cells, which have nucleus and cytoplasm derived from different species, produce vigorous and vital organisms only when the correct version of scs is present in their nucleus. In this study, bulks of in vivo radiation hybrids segregating for the scs phenotype have been genotyped by sequencing with over 1.9 million markers. The high marker saturation obtained for a critical region of chromosome 1D allowed identification of 3318 reads that mapped in close proximity of the scs. A novel in silico approach was deployed to extend these short reads to sequences of up to 70 Kb in length and identify candidate open reading frames (ORFs). Markers were developed to anchor the short contigs containing ORFs to a radiation hybrid map of 650 individuals with resolution of 288 Kb. The region containing the scs locus was narrowed to a single Bacterial Artificial Chromosome (BAC) contig of Aegilops tauschii. Its sequencing and assembly by nano-mapping allowed rapid identification of a rhomboid gene as the only ORF existing within the refined scs locus. Resequencing of this gene from multiple germplasm sources identified a single nucleotide mutation, which gives rise to a functional amino acid change. Gene expression characterization revealed that an active copy of this rhomboid exists on all homoeologous chromosomes of wheat, and depending on the specific cytoplasm each copy is preferentially expressed. Therefore, a new methodology was applied to unique genetic stocks to rapidly identify a strong candidate gene for the control of nuclear–cytoplasmic compatibility in wheat.