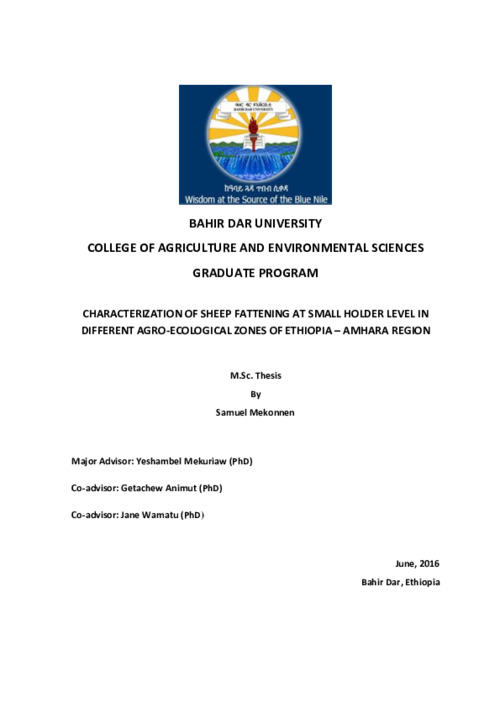 The purpose of the study was to characterize sheep fattening production system at small holder level in rural areas of Ethiopia, based on different agro-ecological zones (AEZs). 108 small holder sheep fatteners were selected by random sampling out of Amhara region. Therefore, three AEZs within Amhara region made a total of 12 study areas, each with about 36 respondents who were selected purposively, based on the relevant activity and accessibility to transportation. The collected data from the questionnaire was analyzed based on software, SPSS. The result of the region showed that the sheep fattening practice in general, in different AEZs, was found relatively more defined in the highlands, than in the mid lands and the low lands, respectively. Better market demand, shorter distance to health center, qualitatively and quantitatively feed resources availability, higher net profit gain, relatively better market value chain were scored in the highlands than the rest, followed by mid land and the least score in low lands. The high temperatures in the lowlands influenced health problem which ultimately resulted in low production. Even so, the fattening production system is semi- intensive even in better scoring areas and declines to extensive in most cases. But in fulfilling the constraints of each AEZ would enable them to have optimum and relatively, similar production potential. Besides, using appropriate breeds, market chains, distribution of industrial by-products and promotion of loans supported with agricultural inputs would encourage the small holder farmers to engage in sheep fattening, consistently