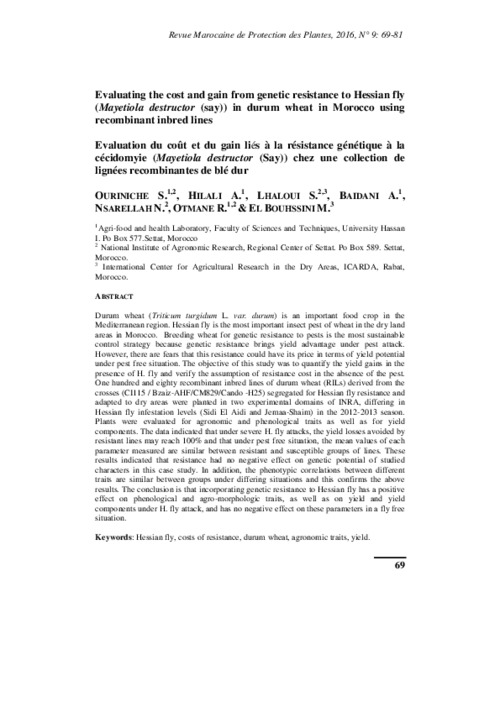 Durum wheat (Triticum turgidum L. var. durum) is an important food crop in the Mediterranean region. Hessian fly is the most important insect pest of wheat in the dry land areas in Morocco. Breeding wheat for genetic resistance to pests is the most sustainable control strategy because genetic resistance brings yield advantage under pest attack. However, there are fears that this resistance could have its price in terms of yield potential under pest free situation. The objective of this study was to quantify the yield gains in the presence of H. fly and verify the assumption of resistance cost in the absence of the pest. One hundred and eighty recombinant inbred lines of durum wheat (RILs) derived from the crosses (CI115 / Bzaiz-AHF/CM829/Cando -H25) segregated for Hessian fly resistance and adapted to dry areas were planted in two experimental domains of INRA, differing in Hessian fly infestation levels (Sidi El Aidi and Jemaa-Shaim) in the 2012-2013 season. Plants were evaluated for agronomic and phenological traits as well as for yield components. The data indicated that under severe H. fly attacks, the yield losses avoided by resistant lines may reach 100% and that under pest free situation, the mean values of each parameter measured are similar between resistant and susceptible groups of lines. These results indicated that resistance had no negative effect on genetic potential of studied characters in this case study. In addition, the phenotypic correlations between different traits are similar between groups under differing situations and this confirms the above results. The conclusion is that incorporating genetic resistance to Hessian fly has a positive effect on phenological and agro-morphologic traits, as well as on yield and yield components under H. fly attack, and has no negative effect on these parameters in a fly free situation.