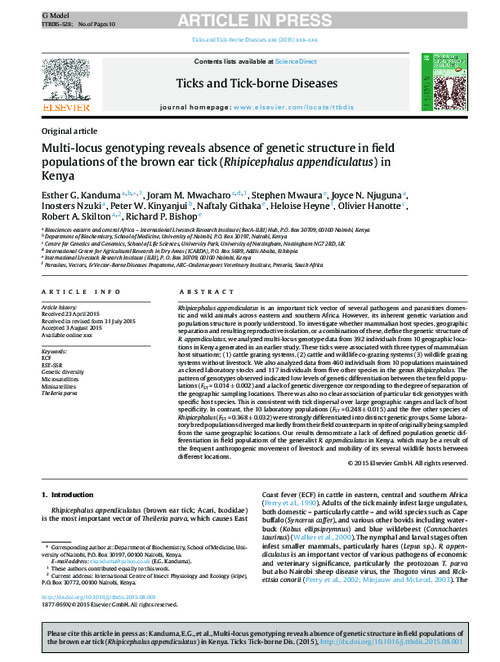 Rhipicephalus appendiculatus is an important tick vector of several pathogens and parasitizes domestic and wild animals across eastern and southern Africa. However, its inherent genetic variation and population structure is poorly understood. To investigate whether mammalian host species, geographic separation and resulting reproductive isolation, or a combination of these, define the genetic structure of R. appendiculatus, we analyzed multi-locus genotype data from 392 individuals from 10 geographic locations in Kenya generated in an earlier study. These ticks were associated with three types of mammalian host situations; (1) cattle grazing systems, (2) cattle and wildlife co-grazing systems (3) wildlife grazing systems without livestock. We also analyzed data from 460 individuals from 10 populations maintained as closed laboratory stocks and 117 individuals from five other species in the genus Rhipicephalus. The pattern of genotypes observed indicated low levels of genetic differentiation between the ten field populations (FST = 0.014 ± 0.002) and a lack of genetic divergence corresponding to the degree of separation of the geographic sampling locations. There was also no clear association of particular tick genotypes with specific host species. This is consistent with tick dispersal over large geographic ranges and lack of host specificity. In contrast, the 10 laboratory populations (FST = 0.248 ± 0.015) and the five other species of Rhipicephalus (FST = 0.368 ± 0.032) were strongly differentiated into distinct genetic groups. Some laboratory bred populations diverged markedly from their field counterparts in spite of originally being sampled from the same geographic locations. Our results demonstrate a lack of defined population genetic differentiation in field populations of the generalist R. appendiculatus in Kenya, which may be a result of the frequent anthropogenic movement of livestock and mobility of its several wildlife hosts between different locations.