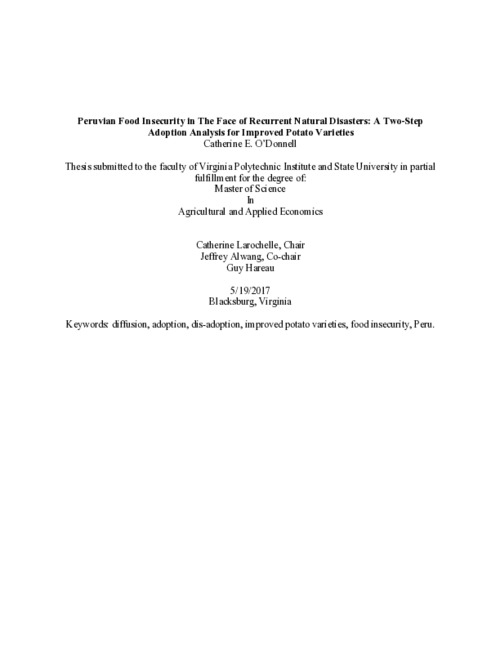 The International Potato Center (CIP) and Peruvian National Agricultural Research Institute (INIA) have invested a substantial amount of resources towards the development of improved potato varieties in Peru. These varieties are adaptable to the agro-ecologies of the Andes and have specific biotic and abiotic attributes. These efforts have led to the release of several prominent varieties including Canchan-INIA, Amarilis, Unica, Serranita and others. A 2013 household survey conducted by CIP was used to describe the diffusion of improved potato varieties in Peru. These data were also used to identify specific constraints to their adoption and dis-adoption. The assessment focused on a two-step adoption model, adoption and dis-adoption, by utilizing a Heckman Probit model to demonstrate two-steps of the adoption process. The Heckman Probit model was used to analyze variables affecting adoption and dis-adoption of improved varieties. Results suggest that adoption is region specific, time dependent, and in some cases relies on informal transmission methods. Risk to food insecurity and recurrent natural phenomena affect adoption and sometimes dis-adoption. Additionally, factors affecting a farmer’s exposure to risk, such as information constraints and household head age, wealth, and social network were found to affect the adoption and dis-adoption of improved varieties.