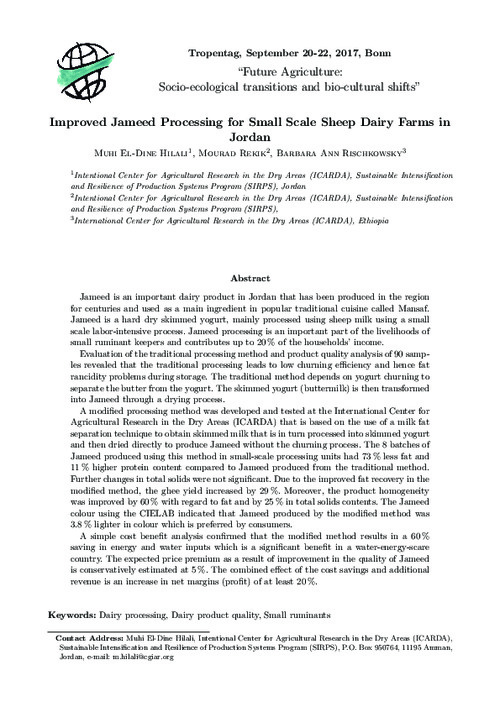 Jameed is an important dairy product in Jordan that has been produced in the region for centuries and used as a main ingredient in popular traditional cuisine called Mansaf. Jameed is a hard dry skimmed yogurt, mainly processed using sheep milk using a small scale labor-intensive process. Jameed processing is an important part of the livelihoods of small ruminant keepers and contributes up to 20 % of the households’ income. Evaluation of the traditional processing method and product quality analysis of 90 samples revealed that the traditional processing leads to low churning efficiency and hence fat rancidity problems during storage. The traditional method depends on yogurt churning to separate the butter from the yogurt. The skimmed yogurt (buttermilk) is then transformed into Jameed through a drying process. A modified processing method was developed and tested at the International Center for Agricultural Research in the Dry Areas (ICARDA) that is based on the use of a milk fat separation technique to obtain skimmed milk that is in turn processed into skimmed yogurt and then dried directly to produce Jameed without the churning process. The 8 batches of Jameed produced using this method in small-scale processing units had 73 % less fat and 11 % higher protein content compared to Jameed produced from the traditional method. Further changes in total solids were not significant. Due to the improved fat recovery in the modified method, the ghee yield increased by 29 %. Moreover, the product homogeneity was improved by 60 % with regard to fat and by 25 % in total solids contents. The Jameed colour using the CIELAB indicated that Jameed produced by the modified method was 3.8 % lighter in colour which is preferred by consumers. A simple cost benefit analysis confirmed that the modified method results in a 60 % saving in energy and water inputs which is a significant benefit in a water-energy-scare country. The expected price premium as a result of improvement in the quality of Jameed is conservatively estimated at 5 %. The combined effect of the cost savings and additional revenue is an increase in net margins (profit) of at least 20 %