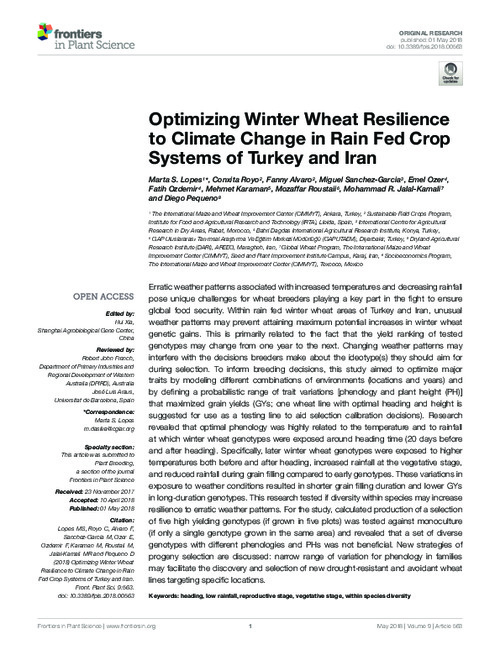 Erratic weather patterns associated with increased temperatures and decreasing rainfall pose unique challenges for wheat breeders playing a key part in the fight to ensure global food security. Within rain fed winter wheat areas of Turkey and Iran, unusual weather patterns may prevent attaining maximum potential increases in winter wheat genetic gains. This is primarily related to the fact that the yield ranking of tested genotypes may change from one year to the next. Changing weather patterns may interfere with the decisions breeders make about the ideotype(s) they should aim for during selection. To inform breeding decisions, this study aimed to optimize major traits by modeling different combinations of environments (locations and years) and by defining a probabilistic range of trait variations [phenology and plant height (PH)] that maximized grain yields (GYs; one wheat line with optimal heading and height is suggested for use as a testing line to aid selection calibration decisions). Research revealed that optimal phenology was highly related to the temperature and to rainfall at which winter wheat genotypes were exposed around heading time (20 days before and after heading). Specifically, later winter wheat genotypes were exposed to higher temperatures both before and after heading, increased rainfall at the vegetative stage, and reduced rainfall during grain filling compared to early genotypes. These variations in exposure to weather conditions resulted in shorter grain filling duration and lower GYs in long-duration genotypes. This research tested if diversity within species may increase resilience to erratic weather patterns. For the study, calculated production of a selection of five high yielding genotypes (if grown in five plots) was tested against monoculture (if only a single genotype grown in the same area) and revealed that a set of diverse genotypes with different phenologies and PHs was not beneficial. New strategies of progeny selection are discussed: narrow range of variation for phenology in families may facilitate the discovery and selection of new drought-resistant and avoidant wheat lines targeting specific locations.