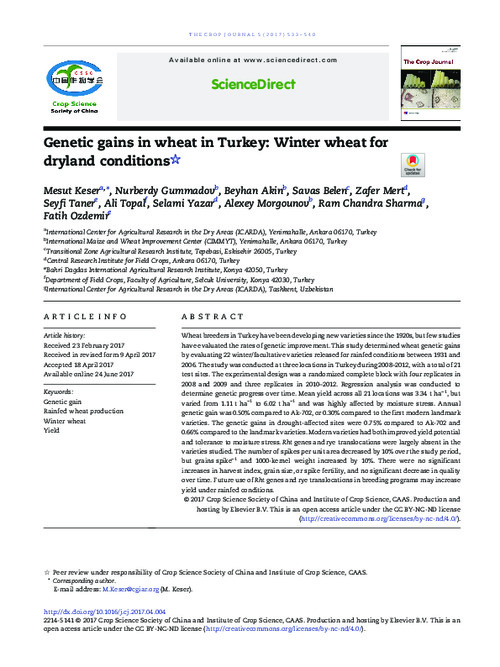 Wheat breeders in Turkey have been developing new varieties since the 1920s, but few studies have evaluated the rates of genetic improvement. This study determined wheat genetic gains by evaluating 22 winter/facultative varieties released for rainfed conditions between 1931 and 2006. The study was conducted at three locations in Turkey during 2008-2012, with a total of 21 test sites. The experimental design was a randomized complete block with 4 replicates in two years and 3 replicates in the other years. Regression analysis was conducted to determine genetic progress over time Mean yield across all 21 locations was 3.34 t ha-1, but varied from 1.11 t ha-1 to 6.02 t ha-1 and was highly affected by moisture stress. Annual genetic gain was 0.50% compared to Ak-702, or 0.30% compared to the first modern landmark varieties. The genetic gains in drought-affected sites were 0.75% compared to Ak-702 and 0.66% compared to the landmark varieties. Modern varieties had both improved yield potential and tolerance to moisture stress. Rht genes and rye translocations were largely absent in the varieties studied. The number of spikes per unit area decreased by 10% over the study period, but kernels spike-1 and thousand kernel weight increased by 10%. There were no significant increases in harvest index, grain size, or spike fertility, and no significant decrease in quality over time. Future use of Rht genes and rye translocations in breeding programs may increase yield under rainfed conditions.