Elaboration of Livestock R&D Scenarios and Assessment of the Impact of Alternative Investment Scenarios on Employment Generation: A Methodological Framework 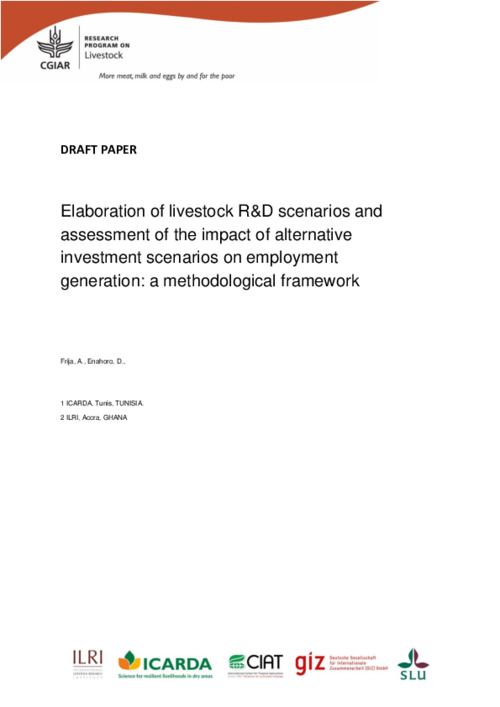 As agriculture is the largest employment sector in Sub-Saharan Africa, and as the average contribution of agriculture to GDP is more than 17% (OECD/FAO, 2016; World Bank, 2017), the agricultural employment growth can be a driving force of eradicating extreme poverty in these marginalized areas. Agricultural employment growth in the extreme poverty stricken Sub-Saharan Africa is however limited by a number of factors. The world’s population is expected to increase in between 8.71 billion to 10.8 billion by 2050 (UN, 2015), and 65% of the increase of population will take place in sub-Saharan Africa and Southern Asia. Due to the population pressure, the per capita arable land has been declining in Sub-Saharan Africa. In 1961, the per capita arable land in Sub-Saharan Africa was 0.57ha, which has declined to 0.22ha, in 2015 (World Bank, 2017). With further increase of population, the per capita arable land availability will also further decline in these regions. This ever-declining land-man ratio can, firstly push the people out of agriculture, and secondly may force people to stay in the agricultural sector out of necessity but not by choice. Also, the declining land-man ratio can push the marginal productivity of agricultural labor further down, and, hence can aggravate the poverty situation in Sub-Saharan Africa. In a recent study, Bezu and Holden (2014) demonstrate that young Ethiopians are pushed out of agricultural activities mainly due to the lack of access to the agricultural land, and only 9% of the young Ethiopians opted for agriculture as their future occupation also because of this land constraint. An escape from this impasse can be adequate public and private investments in agricultural capital goods, such as on new machinery, infrastructure, and technology. Given the strong welfare impacts, agricultural investment can be instrumental in increasing employment and thus reducing poverty and hunger in the agriculture dependent extreme poverty-stricken regions. Particularly, government expenditure in highly positively associated with agricultural capital formation and growth exhibits the decisive role of the government expenditure in creating an enabling environment and thriving agricultural sector. Research has revealed that 10% increase in public expenditure on agriculture leads to 0.34 percent increase in a country’s agricultural total factor productivity. In the same time, agricultural growth, particularly in Africa is considered as more pro-poor compared to industrial growth, primarily because it allows for greater participation of the poorest smallholders in the growth process (Diao et al., 2010a). This is more relevant for the poorest developing economies with high concentration of smallholder farmers, and where agriculture is the dominant sector in the poorest rural areas. This is also relevant for both, crops and livestock activities due to the respective importance of these activities in the different African countries.