Enhancing the Livelihood and Food Security of Syrian Refugees in Lebanon 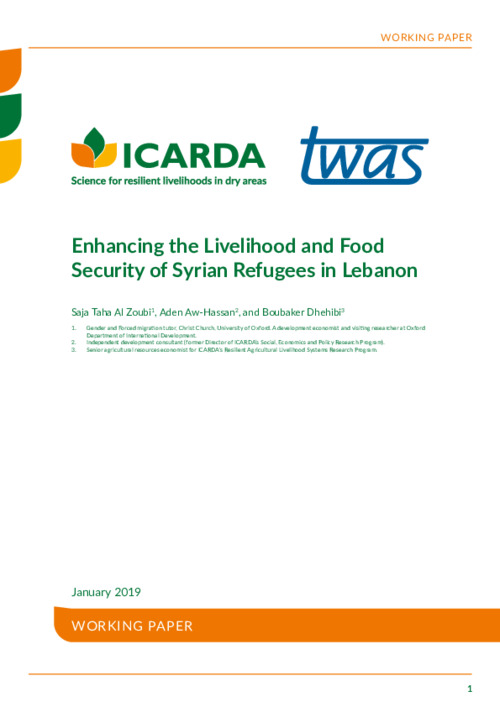 This study uses information and survey data collected from refugee households, refugee workers’ bosses, camp leaders and local and international humanitarian organizations. The sustainable livelihoods framework is applied to understanding the livelihoods of refugee families and the challenges they face. This is done by analyzing the refugee household’s access to physical, natural, human, social and financial assets, their income and livelihood sources; and the livelihood outcomes on food security, shelter, education and health. Syrian refugees in the Bekaa Valley, Lebanon, have found security from the ravaging conflict in Syria. However, in spite of the commendable efforts from the host country and the UN, as well as other international and local humanitarian organizations, the support provided has failed to meet the humanitarian standards set by those organizations. Nevertheless, the support varies greatly in terms of the coverage provided in response to actual needs (14 to 100 percent), proportion of beneficiaries (16 to 80 percent) in relation to the total refugee population and duration provided (much support is only provided for a few months). However, the most important refugee income source is the seasonal credit from local businesses, which 95 percent rely on. Agriculture is a main source of income for about 90 percent of refugee households, providing 22 percent of total income. Non-agricultural employment provides 21 percent of total income, albeit fewer households have access to the latter. The majority of all workers (61 percent) were male, while females were 39 percent. Nonagricultural work is male-dominated (96 percent male), while agricultural work is more of a female-led activity (53 percent female vs 47 percent male). Humanitarian aid—which is both in-kind supplies and in cash for a great majority of refugee households (89 percent)—is the most important income source (49 percent). Only 4 percent of people in the sample had legal documentation, which affects the work conditions for work permits, lack of contracts, lack of workers’ rights and inability to complain, bad treatment by employers in the work place, fluctuation and seasonality of work, lack of safety practices, short duration of work, low wages compared to work and delayed payments. There is also a clear gender gap in wages among the Syrian refugees; overall, women make up the majority of low wage earners. In this survey, 22 percent of workers were children, 59 percent of them were female and 41 percent were male. Sixty-nine percent of the refugees are severely food insecure, while 9 percent are extremely food insecure and need emergency intervention. Refugee shelter comprises mainly of tents built on private land, where landlords are paid monthly rent. There is a general lack of healthcare in the refugee camps. In this study, 74 percent of school age children were not attending school, while 26 percent were attending informal school. Only 4 percent were attending formal school.