Wheat drought-tolerance to enhance food security in Tunisia, birthplace of the Arab Spring 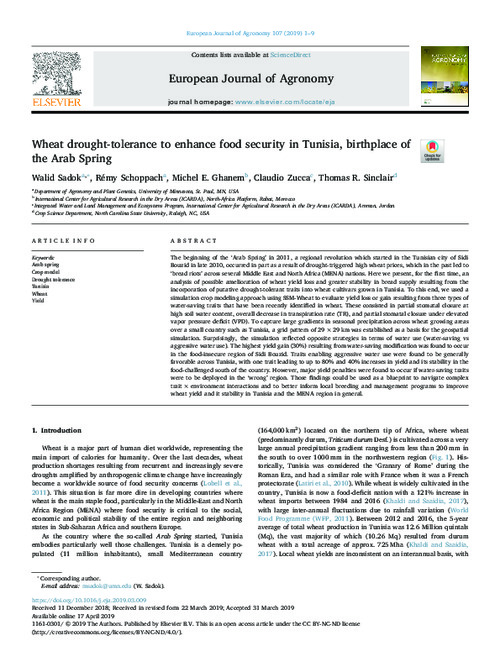 The beginning of the‘Arab Spring’in 2011, a regional revolution which started in the Tunisian city of SidiBouzid in late 2010, occurred in part as a result of drought-triggered high wheat prices, which in the past led to‘bread riots’across several Middle East and North Africa (MENA) nations. Here we present, for thefirst time, ananalysis of possible amelioration of wheat yield loss and greater stability in bread supply resulting from theincorporation of putative drought-tolerant traits into wheat cultivars grown in Tunisia. To this end, we used asimulation crop modeling approach using SSM-Wheat to evaluate yield loss or gain resulting from three types ofwater-saving traits that have been recently identified in wheat. These consisted in partial stomatal closure athigh soil water content, overall decrease in transpiration rate (TR), and partial stomatal closure under elevatedvapor pressure deficit (VPD). To capture large gradients in seasonal precipitation across wheat growing areasover a small country such as Tunisia, a grid pattern of 29 × 29 km was established as a basis for the geospatialsimulation. Surprisingly, the simulation reflected opposite strategies in terms of water use (water-saving vsaggressive water use). The highest yield gain (30%) resulting from water-saving modification was found to occurin the food-insecure region of Sidi Bouzid. Traits enabling aggressive water use were found to be generallyfavorable across Tunisia, with one trait leading to up to 80% and 40% increases in yield and its stability in thefood-challenged south of the country. However, major yield penalties were found to occur if water-saving traitswere to be deployed in the‘wrong’region. Thosefindings could be used as a blueprint to navigate complextrait × environment interactions and to better inform local breeding and management programs to improvewheat yield and it stability in Tunisia and the MENA region in general.