Revival of traditional best practices for rangeland restoration under climate change in the dry areas: A case study from Southern Tunisia 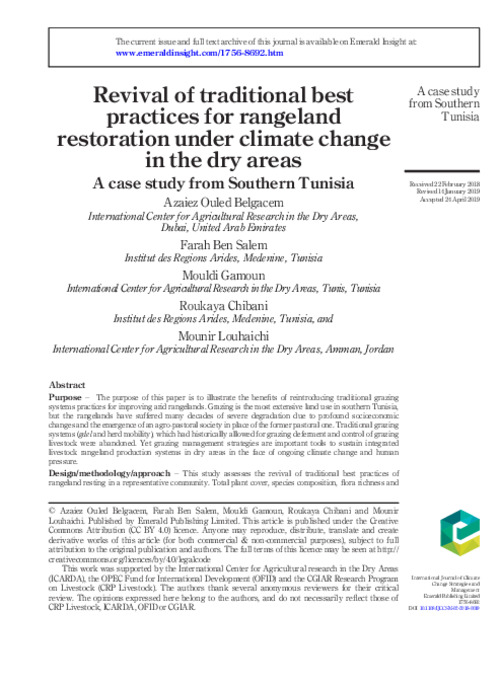 The purpose of this paper is to illustrate the benefits of reintroducing traditional grazing systems practices for improving arid rangelands. Grazing is the most extensive land use in southern Tunisia, but the rangelands have suffered many decades of severe degradation due to profound socioeconomic changes and the emergence of an agro-pastoral society in place of the former pastoral one. Traditional grazing systems (gdel and herd mobility), which had historically allowed for grazing deferment and control of grazing livestock were abandoned. Yet grazing management strategies are important tools to sustain integrated livestock rangeland production systems in dry areas in the face of ongoing climate change and human pressure. Design/methodology/approach – This study assesses the revival of traditional best practices of rangeland resting in a representative community. Total plant cover, species composition, flora richness and range production were determined in six rangeland sites subjected respectively to one, two and three years of rest; one and two years of light grazing after rest; and free grazing (control). Findings – Results showed that dry rangelands keep their resilience to the negative effects of climate change once human pressure is controlled. A maximum of two years of rest is enough to sustainably manage the rangelands in southern Tunisia, as this protection showed considerable and positive effects on the parameters scored. Originality/value – The revival of the traditional best practices under new arrangements adapted to current biophysical and socioeconomic conditions would be an excellent tool to mitigate the negative effects of frequent droughts and reduce the animal feed costs that poor farmers face.