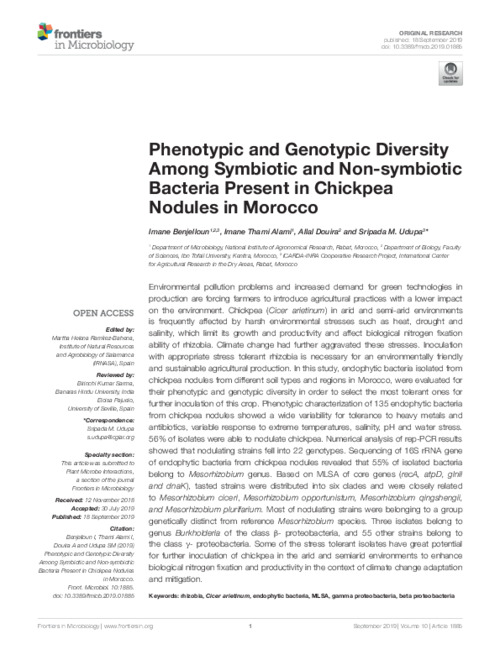 Environmental pollution problems and increased demand for green technologies in production are forcing farmers to introduce agricultural practices with a lower impact on the environment. Chickpea (Cicer arietinum) in arid and semi-arid environments is frequently affected by harsh environmental stresses such as heat, drought and salinity, which limit its growth and productivity and affect biological nitrogen ﬁxation ability of rhizobia. Climate change had further aggravated these stresses. Inoculation with appropriate stress tolerant rhizobia is necessary for an environmentally friendly and sustainable agricultural production. In this study, endophytic bacteria isolated from chickpea nodules from different soil types and regions in Morocco, were evaluated for their phenotypic and genotypic diversity in order to select the most tolerant ones for further inoculation of this crop. Phenotypic characterization of 135 endophytic bacteria from chickpea nodules showed a wide variability for tolerance to heavy metals and antibiotics, variable response to extreme temperatures, salinity, pH and water stress. 56% of isolates were able to nodulate chickpea. Numerical analysis of rep-PCR results showed that nodulating strains fell into 22 genotypes. Sequencing of 16S rRNA gene of endophytic bacteria from chickpea nodules revealed that 55% of isolated bacteria belong to Mesorhizobium genus. Based on MLSA of core genes (recA, atpD, glnII and dnaK), tasted strains were distributed into six clades and were closely related to Mesorhizobium ciceri, Mesorhizobium opportunistum, Mesorhizobium qingshengii, and Mesorhizobium plurifarium. Most of nodulating strains were belonging to a group genetically distinct from reference Mesorhizobium species. Three isolates belong to genus Burkholderia of the class β- proteobacteria, and 55 other strains belong to the class γ- proteobacteria. Some of the stress tolerant isolates have great potential for further inoculation of chickpea in the arid and semiarid environments to enhance biological nitrogen ﬁxation and productivity in the context of climate change adaptation and mitigation.