Catchment-scale modelling of water harvesting structures in the Jordan Badia 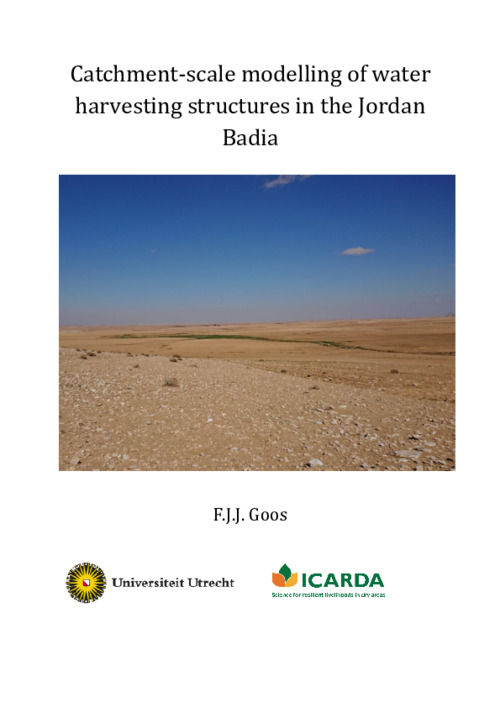 The Badia is a dry region that covers 81% of Jordan. At the same time it is an import source for food, especially for agro pastoral communities depending of livestock farming systems. Macro scale rain water harvesting (RWH) is currently used to support the production of fodder. Vallerani structures are a promising micro RWH technique that can be applied over large areas. Micro basins from these structures retain surface water and store it in the soil profile, reducing surface runoff and land degradation. The Soil and Water Assessment Tool (SWAT) was used to assess the hydrological impacts of the Vallerani structures on a small catchment scale. A small watershed (10km2) located near the Al-Majdiyya village and east of the Queen Alia Airport was used as study area. An observation setup was installed to measure discharge in a sub-watershed with Vallerani structures installed and one without any RWH. Calibration of the SWAT model was based on this quantitative data from the 2018/2019 rainy season. It was evaluated based on semi-quantitative data from the local population, who indicated that there are 4-6 discharge events annually. The calibrated model showed good performance for large events, but underestimated smaller events. The number of discharge events that were modelled was lower than indicated by the local population. Increasing the area treated with Vallerani structures decreased the number of discharge events linearly to a maximum of 45.3% (R2=0.984). Total flow decreased linearly as well to a maximum of 36.2% (R2=0.996). The reductions in number of events and total discharge produced by the SWAT model were lower than those observed in the field. Here they decreased by 75.0% and 61.0% respectively. The model is promising as it describes the right trends, but impact of the Vallerani structures is underestimated. A more extensive dataset is needed to reevaluate model performance. Discharge data from the recalibrated model can be used as input for other models to assess the effects of Vallerani structures on the current agricultural practices.