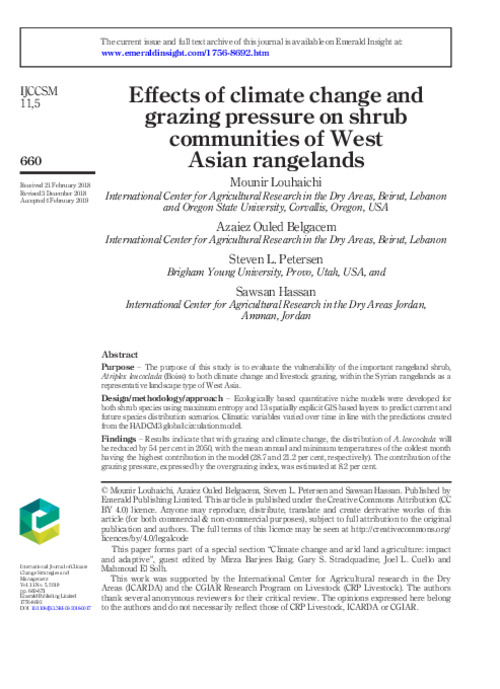 Purpose – The purpose of this study is to evaluate the vulnerability of the important rangeland shrub, Atriplex leucoclada (Boiss) to both climate change and livestock grazing, within the Syrian rangelands as a representative landscape type ofWest Asia. Design/methodology/approach – Ecologically based quantitative niche models were developed for both shrub species using maximum entropy and 13 spatially explicit GIS-based layers to predict current and future species distribution scenarios. Climatic variables varied over time in line with the predictions created from the HADCM3 global circulation model. Findings – Results indicate that with grazing and climate change, the distribution of A. leucoclada will be reduced by 54 per cent in 2050, with the mean annual and minimum temperatures of the coldest month having the highest contribution in the model (28.7 and 21.2 per cent, respectively). The contribution of the grazing pressure, expressed by the overgrazing index, was estimated at 8.2 per cent. Originality/value – These results suggest that the interaction of climate and increased grazing has the potential to favor the establishment of unpalatable species, while reducing the distribution of preferred plant species on western Asia rangelands.