Risk maps of ticks and tick-borne diseases in sheep 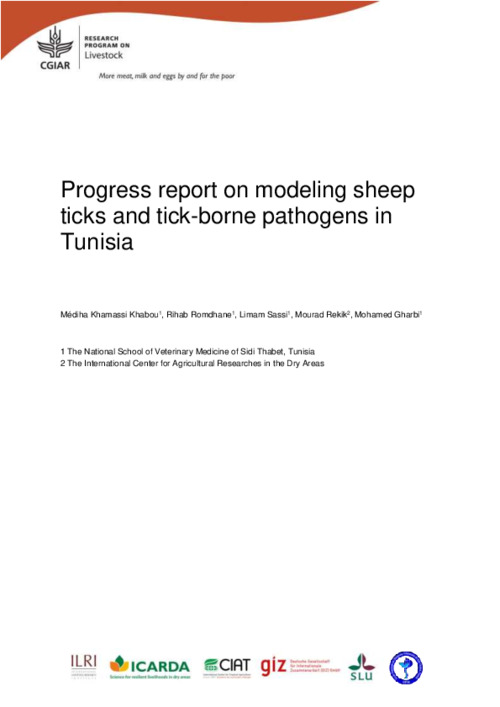 In Tunisia, sheep are exposed to multiple parasites and pathogens, which has a high economic impact and handicap market access, especially for poor farmers. Rhipicephalus spp. and Hyalomma spp. ticks are competent vectors of wide range of pathogens in sheep. Those pathogens have either economic impact by affecting sheep health, like Babesia ovis or have public health impact like Anaplasma phagocytophilum, Crimean Congo Hemorrhagic Fever virus…etc. Studies on tick-borne pathogens (TBP) in sheep in Tunisia are scattered and need to be combined with a study of the biology of the tick vectors and environmental factors. Since, some TBP are zoonotic, well understanding the mechanism of interactions between ticks-host-environment is required to implement an efficient control program against ticks and TBPs. Tunisia has a rich variety of bioclimatic area, ranging from the humid to the Saharan, in the northern and the southern country, respectively. The climate is Mediterranean in Northern part with rainy winters (1500 mm) and in South, the maximum rainfall doesn’t reach 200 mm. Environmental variables are known to be effective contributors to habitat suitability of almost all tick species. Among those variables, annual precipitation (Bio12), mean temperature of the driest quarter (Bio9), minimum temperature of the coldest month (Bio6), and mean Normalized Difference Vegetation Index (NDVI) are involved in tick distribution and are usually considered in modeling it (Kessler et al., 2019). While the regional distributions of tick species were investigated by several studies, more localized distribution estimates has never been done in Tunisia and the effect of environmental factors on TBP has never been studied before.