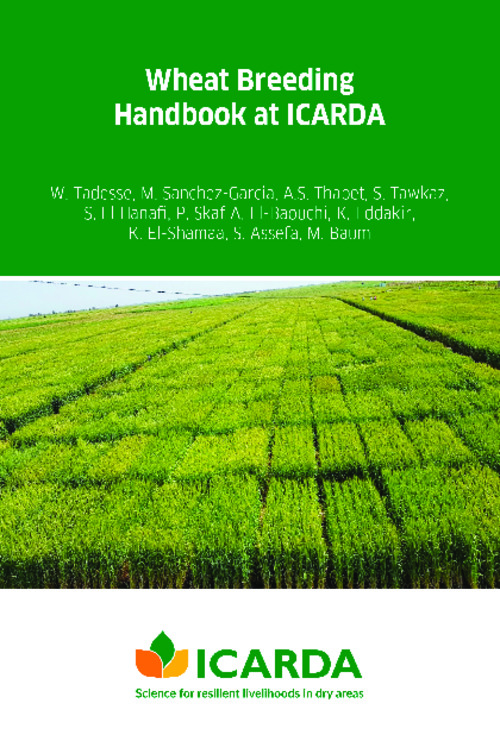 Wheat is the most widely adapted crop, growing in diverse environments ranging from sea level to regions as high as 4570 m.a.s.l. in Tibet (Percival, 1921) and from the Arctic Circle to the equator, but most suitably at the latitude range of 30° and 60°N and 27° and 40°S (Nuttonson, 1955) enabling wheat harvest somewhere in the world during every month of the year (Briggle and Curtis, 1987). Based on ploidy levels (number of chromosomes sets in a cell), cultivated wheats could be diploids (2n= 2x =14, AA), tetraploids (2n =4x= 28, BBAA) and hexaploids (2n = 6x=42, BBAADD) (Kihara, 1924). The chromosome sets in the tetraploids and hexaploid wheats are duplications of different genomes, and hence bread wheat and durum wheats are allopolyploids or to be exact allotetraploids and allohexaploids, respectively. World-wide, bread wheat accounts for 95% of all the wheat produced. Based on growth habit, wheat is classified into spring wheat and facultative/winter wheat, covering about 65 and 35% of the total global wheat production area, respectively (Braun et al., 2010; Braun and Saulescu, 2002). Wheat has played a fundamental role in human civilization and improving food security at global and regional levels. The flour of bread wheat is used to make french bread, arabic bread, chapatti, biscuits, pastry products and the production of commercial starch and gluten while the flour from durum wheat is used for the production of semolina for use in pasta and macaroni products. In North Africa, durum wheat is preferred for the preparation of couscous and bulgur. It is also widely used to prepare a special bread by mixing both bread and durum flours. According to Braun et al. (2010), wheat provides about 19% of the calories and 21% of protein needs of daily human requirements. It is a staple food for 40% of the world’s population mainly in Europe, North America, and the western and north parts of Asia. The demand for wheat is growing rapidly in new wheat growing regions of the world such as Eastern and Southern Africa (5.8%), West and Central Africa (4.7%) and South Asia and 2 Pacific (4.3%). Demand is also growing in the traditional wheat growing regions of Central Asia (5.6%), Australia (2.2%) and North Africa (2.2%) (Shiferaw et al, 2013). Worldwide, wheat is the most traded agricultural commodity with a trade volume of 144 MT, with a total value of 36 billion US dollars (2010 data; Shiferaw et al, 2013). Many of the developing countries that depend on wheat as a staple crop are not self-sufficient in wheat production, and accordingly, wheat is their single most important imported commodity. Wheat also accounts for the largest share of emergency food aid (Dixon et al., 2009). Wheat production at global level has significantly increased through the years (Figure 1). According to FAO (2018), about 749.5 million tons of wheat were produced on average of 220 million ha with a productivity level of 3.4 t ha-1, a highly significant increase from 1961, which stood at 222 million tons with a productivity level of only 1.2 t/ha (Figure 1). The accelerated increase in wheat production is attributed to the adoption of technology packages, in particular improved high yielding and disease resistant varieties with better response to inputs (e.g. fertilizers, water), improved irrigation systems, machineries and pesticides as well as better management practices, coupled with conducive policies and strong institutions (Baum et al., 2013).