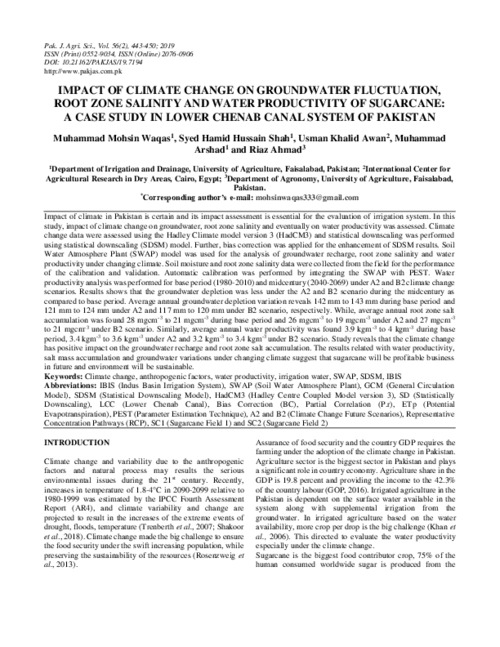 Impact of climate in Pakistan is certain and its impact assessment is essential for the evaluation of irrigation system. In this study, impact of climate change on groundwater, root zone salinity and eventually on water productivity was assessed. Climate change data were assessed using the Hadley Climate model version 3 (HadCM3) and statistical downscaling was performed using statistical downscaling (SDSM) model. Further, bias correction was applied for the enhancement of SDSM results. Soil Water Atmosphere Plant (SWAP) model was used for the analysis of groundwater recharge, root zone salinity and water productivity under changing climate. Soil moisture and root zone salinity data were collected from the field for the performance of the calibration and validation. Automatic calibration was performed by integrating the SWAP with PEST. Water productivity analysis was performed for base period (1980-2010) and midcentury (2040-2069) under A2 and B2 climate change scenarios. Results shows that the groundwater depletion was less under the A2 and B2 scenario during the midcentury as compared to base period. Average annual groundwater depletion variation reveals 142 mm to 143 mm during base period and 121 mm to 124 mm under A2 and 117 mm to 120 mm under B2 scenario, respectively. While, average annual root zone salt accumulation was found 28 mgcm-3 to 21 mgcm-3 during base period and 26 mgcm-3 to 19 mgcm-3 under A2 and 27 mgcm-3 to 21 mgcm-3 under B2 scenario. Similarly, average annual water productivity was found 3.9 kgm-3 to 4 kgm-3 during base period, 3.4 kgm-3 to 3.6 kgm-3 under A2 and 3.2 kgm-3 to 3.4 kgm-3 under B2 scenario. Study reveals that the climate change has positive impact on the groundwater recharge and root zone salt accumulation. The results related with water productivity, salt mass accumulation and groundwater variations under changing climate suggest that sugarcane will be profitable business in future and environment will be sustainable.