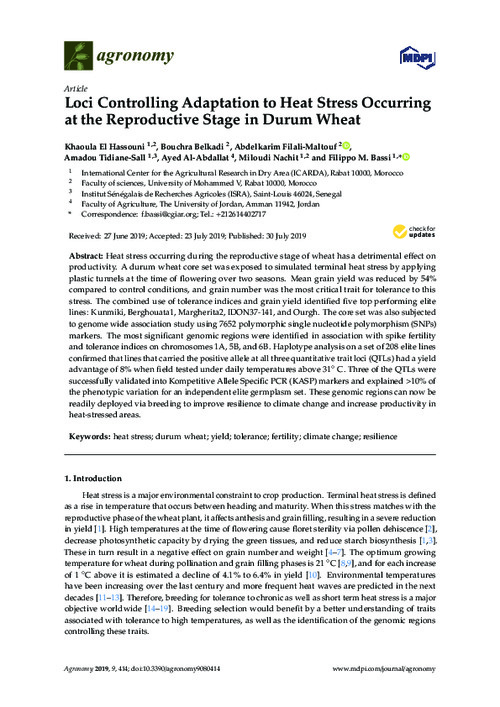 Heat stress occurring during the reproductive stage of wheat has a detrimental effect on productivity. A durum wheat core set was exposed to simulated terminal heat stress by applying plastic tunnels at the time of flowering over two seasons. Mean grain yield was reduced by 54% compared to control conditions, and grain number was the most critical trait for tolerance to this stress. The combined use of tolerance indices and grain yield identified five top performing elite lines: Kunmiki, Berghouata1, Margherita2, IDON37-141, and Ourgh. The core set was also subjected to genome wide association study using 7652 polymorphic single nucleotide polymorphism (SNPs) markers. The most significant genomic regions were identified in association with spike fertility and tolerance indices on chromosomes 1A, 5B, and 6B. Haplotype analysis on a set of 208 elite lines confirmed that lines that carried the positive allele at all three quantitative trait loci (QTLs) had a yield advantage of 8% when field tested under daily temperatures above 31° C. Three of the QTLs were successfully validated into Kompetitive Allele Specific PCR (KASP) markers and explained >10% of the phenotypic variation for an independent elite germplasm set. These genomic regions can now be readily deployed via breeding to improve resilience to climate change and increase productivity in heat-stressed areas.