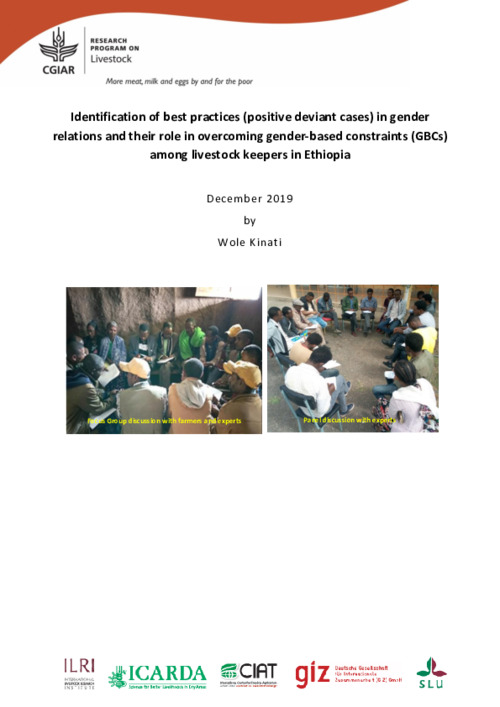 Identification of best practices (positive deviant cases) in gender relations and their role in overcoming gender-based constraints (GBCs) among livestock keepers in Ethiopia.

Positive deviant practices in gender relations and other livelihood aspects being practiced by women and men against the normative gender relations include women assuming the “role of men” in farm operations such as ploughing, harvesting and threshing; women speaking in public; couples sharing every decision and participating together in social associations; women’s active participation in community affairs; women demonstrating a pro-active information seeking behaviour; men’s participation in domestic activities; women playing the role of community elders; and women involved in house construction as main source of income. Generally speaking, the identified best practices are practiced and owned by few individuals and households. This study reveals several important motivating factors for adopting changed gender relations in agriculture and other livelihood aspects: loss of husband to death and divorce, exposure to urban living and “foreign” practices, family influence during early age, higher literacy level, the desire for higher income, and extreme poverty. Individuals or households need to make decisions in three areas, self-conviction, normalized relations (within household & community), and structures (formal & informal institutions) in order to engage in changed gender relations. The study also highlighted the constraining factors to individuals engaged in such practices. Practicing changed gender relations is mostly challenged by external factors which include peer pressure, risk of being isolated from neighbourhoods, and social networks ranging from informal to formal associations. These are in the forms of discouraging words received from peers, neighbours and members of social associations which is mostly experienced during initial stages of exercising positive deviant cases in gender relations. Although, the findings presented are worth to inform the design and implementation of gender transformative approaches to transform constraining gender relations in livestock production and other livelihood aspects, it is apparent that further research is required to cover wider aspects of rural livelihoods for better understanding of positive deviant cases in gender relations in agriculture.