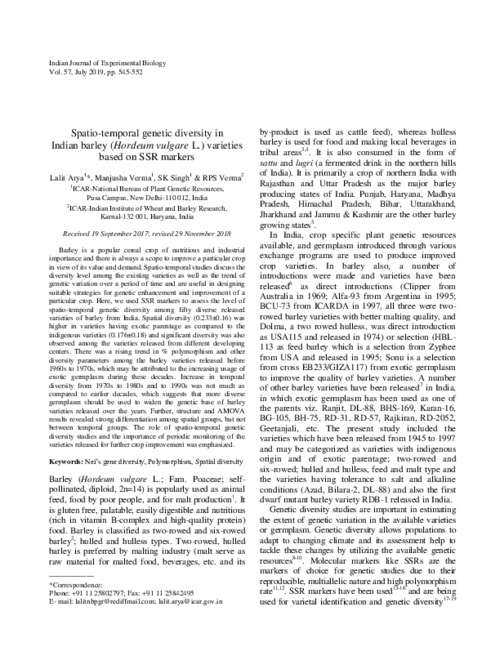 Barley is a popular cereal crop of nutritious and industrial importance and there is always a scope to improve a particular crop in view of its value and demand. Spatio-temporal studies discuss the diversity level among the existing varieties as well as the trend of genetic variation over a period of time and are useful in designing suitable strategies for genetic enhancement and improvement of a particular crop. Here, we used SSR markers to assess the level of spatio-temporal genetic diversity among fifty diverse released varieties of barley from India. Spatial diversity (0.233±0.16) was higher in varieties having exotic parentage as compared to the indigenous varieties (0.176±0.18) and significant diversity was also observed among the varieties released from different developing centers. There was a rising trend in % polymorphism and other diversity parameters among the barley varieties released before 1960s to 1970s, which may be attributed to the increasing usage of exotic germplasm during these decades. Increase in temporal diversity from 1970s to 1980s and to 1990s was not much as compared to earlier decades, which suggests that more diverse germplasm should be used to widen the genetic base of barley varieties released over the years. Further, structure and AMOVA results revealed strong differentiation among spatial groups, but not between temporal groups. The role of spatio-temporal genetic diversity studies and the importance of periodic monitoring of the varieties released for further crop improvement was emphasized