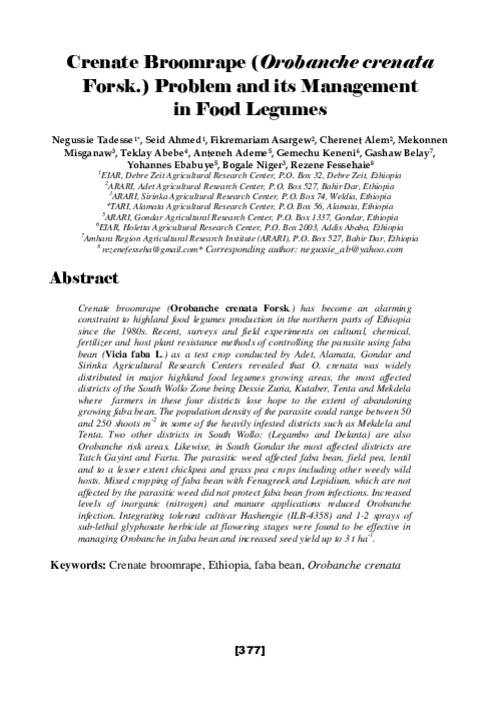 Crenate broomrape (Orobanche crenata Forsk.) has become an alarming constraint to highland food legumes production in the northern parts of Ethiopia since the 1980s. Recent, surveys and field experiments on cultural, chemical, fertilizer and host plant resistance methods of controlling the parasite using faba bean (Vicia faba L.) as a test crop conducted by Adet, Alamata, Gondar and Sirinka Agricultural Research Centers revealed that O. crenata was widely distributed in major highland food legumes growing areas, the most affected districts of the South Wollo Zone being Dessie Zuria, Kutaber, Tenta and Mekdela where farmers in these four districts lose hope to the extent of abandoning growing faba bean. The population density of the parasite could range between 50 and 250 shoots m-2 in some of the heavily infested districts such as Mekdela and Tenta. Two other districts in South Wollo: (Legambo and Delanta) are also Orobanche risk areas. Likewise, in South Gondar the most affected districts are Tatch Gayint and Farta. The parasitic weed affected faba bean, field pea, lentil and to a lesser extent chickpea and grass pea crops including other weedy wild hosts. Mixed cropping of faba bean with Fenugreek and Lepidium, which are not affected by the parasitic weed did not protect faba bean from infections. Increased levels of inorganic (nitrogen) and manure applications reduced Orobanche infection. Integrating tolerant cultivar Hashengie (ILB-4358) and 1-2 sprays of sub-lethal glyphosate herbicide at flowering stages were found to be effective in managing Orobanche in faba bean and increased seed yield up to 3 t ha-1.