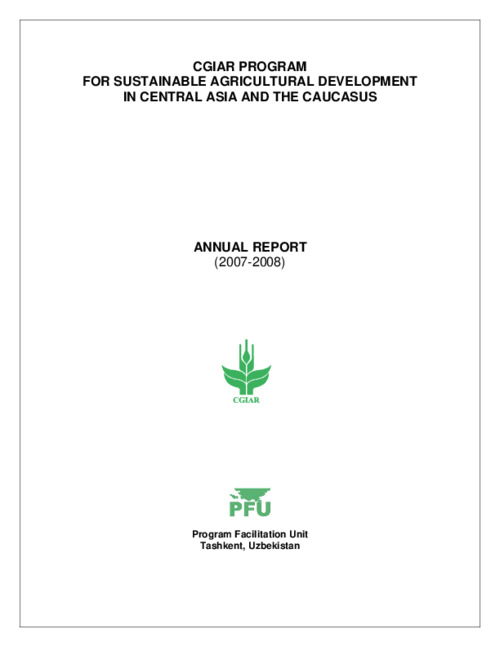 To assess the results and impact of the Program in the region since its inception, an External Review of the Program was conducted in 2008 by a Panel consisting of three eminent international scientists: Dr. Elias Fereres (Chairman), Dr. Gurdev Khush, and Dr. Mohammad Roozitalab. The conclusions and recommendations of the Review Panel will be presented during the 11th Steering Committee Meeting in Astana, Kazakhstan. Dr. Raj Paroda, former Head of PFU and Regional Coordinator (RC) of ICARDA in CAC, completed his mission in Tashkent office in March, 2007. During the interim period between April, 2007 and December, 2007, first Dr. Surendra Beniwal and then Dr. Raj Gupta were acting Heads in both positions. Starting from late December, 2007, Dr. Christopher Martius joined as the new Head of PFU, and Regional Coordinator of the ICARDA-CAC Program. This report highlights, in brief, major activities undertaken by the Consortium partners during the period of June 2007-June 2008.