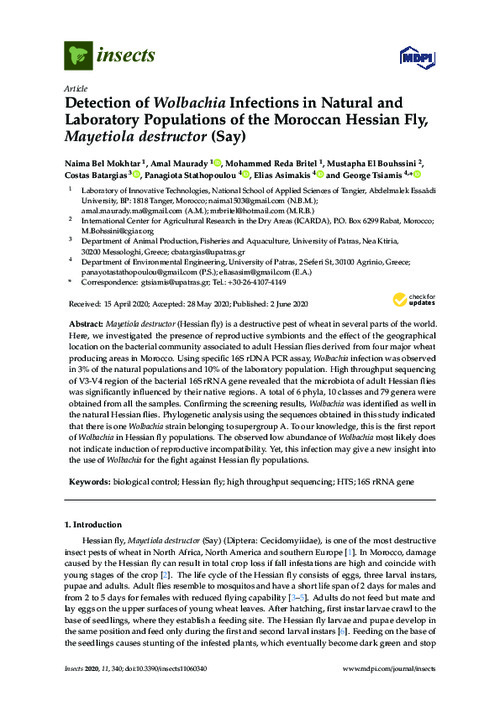 Mayetiola destructor (Hessian fly) is a destructive pest of wheat in several parts of the world. Here, we investigated the presence of reproductive symbionts and the effect of the geographical location on the bacterial community associated to adult Hessian flies derived from four major wheat producing areas in Morocco. Using specific 16S rDNA PCR assay, Wolbachia infection was observed in 3% of the natural populations and 10% of the laboratory population. High throughput sequencing of V3-V4 region of the bacterial 16S rRNA gene revealed that the microbiota of adult Hessian flies was significantly influenced by their native regions. A total of 6 phyla, 10 classes and 79 genera were obtained from all the samples. Confirming the screening results, Wolbachia was identified as well in the natural Hessian flies. Phylogenetic analysis using the sequences obtained in this study indicated that there is one Wolbachia strain belonging to supergroup A. To our knowledge, this is the first report of Wolbachia in Hessian fly populations. The observed low abundance of Wolbachia most likely does not indicate induction of reproductive incompatibility. Yet, this infection may give a new insight into the use of Wolbachia for the fight against Hessian fly populations.