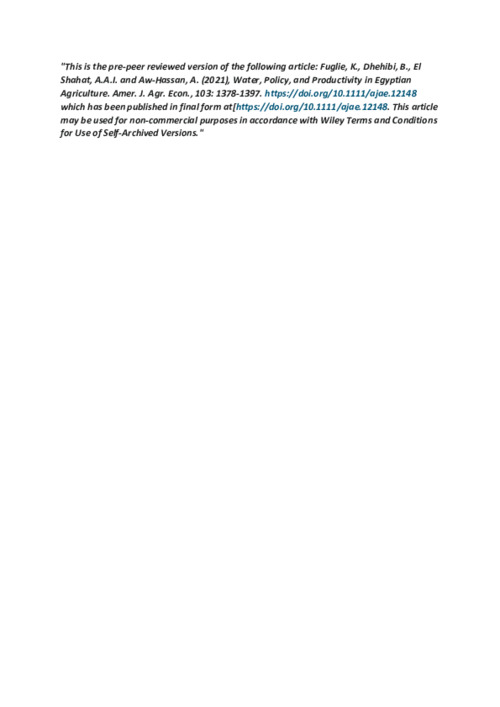 When water scarcity restricts agricultural production, expanding water resources is only one option to increase or maintain output; investments in research to raise productivity can also release constraints on growth. In this paper, we construct a model of optimal resource allocation with both public and private inputs in production—the public sector invests in research and irrigation infrastructure to supply technology and water, respectively, whereas the private sector supplies other inputs. The model is used to derive shadow values for water that suggest “crop per drop” valuations are likely to significantly overstate the marginal value of water in agriculture. We apply our model to analyze sources of growth in Egyptian agriculture, which is almost entirely dependent on publicly supplied irrigation water, over 1961–2016. We construct two indexes of total productivity: total factor productivity treats resources from a producer perspective, where water is free and resource rents accrue to land. Total resource productivity takes a social perspective, where government subsidies for irrigation are included as a cost of production, and resource rents are assigned to water withdrawals for agriculture. Our results find that technological innovations and efficiency gains contributed significantly more to agricultural growth in Egypt than expansion of irrigated area or water use. Productivity growth accelerated in the 1980s following the transition from a socialist to a market-oriented economy. Including social costs of irrigation provision reduces the implied rate of total productivity growth only marginally. Nonetheless, the rise in total resource productivity significantly increased the value of natural resource rents in Egyptian agriculture.