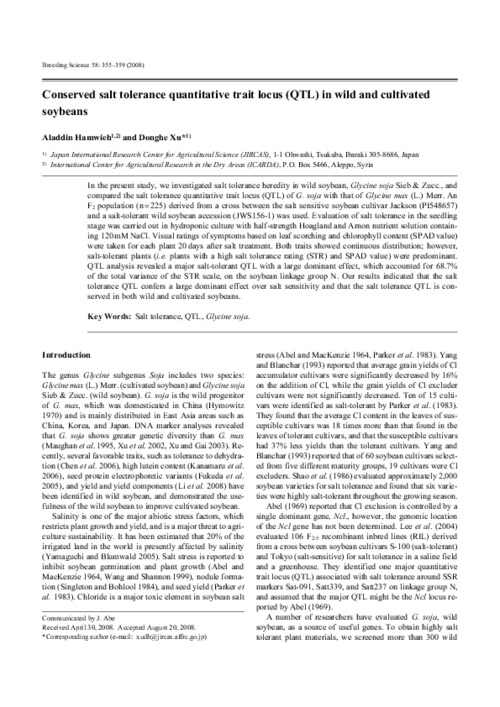 In the present study, we investigated salt tolerance heredity in wild soybean, Glycine soja Sieb & Zucc., and compared the salt tolerance quantitative trait locus (QTL) of G. soja with that of Glycine max (L.) Merr. An F-2 population (n=225) derived from a cross between the salt sensitive soybean cultivar Jackson (P1548657) and a salt-tolerant wild soybean accession (JWS156-1) was used. Evaluation of salt tolerance in the seedling stage was carried out in hydroponic culture with half-strength Hoagland and Arnon nutrient solution containing 120 mM NaCl. Visual ratings of symptoms based on leaf scorching and chlorophyll content (SPAD value) were taken for each plant 20 days after salt treatment. Both traits showed continuous distribution; however, salt-tolerant plants (i.e. plants with a high salt tolerance rating (STR) and SPAD value) were predominant. QTL analysis revealed a major salt-tolerant QTL with a large dominant effect, which accounted for 68.7% of the total variance of the STR scale, on the soybean linkage group N. Our results indicated that the salt tolerance QTL confers a large dominant effect over salt sensitivity and that the salt tolerance QTL is conserved in both wild and Cultivated soybeans.