Spatial Modelling of the Biophysical Potential for Supplemental Irrigation: Methodology and a Case Study in Syria 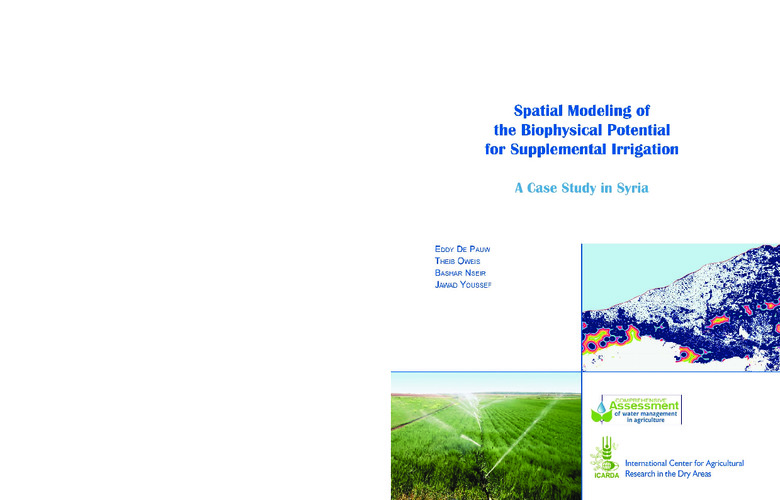 This study describes a modelling methodology for using Geographic Information Systems (GIS) tools to identify potential areas for the introduction of supplemental irrigation. In their most simple concept, such areas would be characterized by the presence of arable soils, non-constraining slopes, agricultural land use, and would be within proximity of existing irrigation schemes, so that water conveyance or pumping costs are not uneconomical. The method is based on the combination of a simple model to calculate the possible water savings – made by the shift from spring/summer fully-irrigated crops to supplemental-irrigated winter/spring crops – with a water allocation procedure for the surrounding rainfed areas based on suitability criteria. The water savings within an irrigated area (the 'water bank') were obtained as the difference in total crop water need between a standard fully irrigated crop (cotton) and a standard partially irrigated crop (wheat), calculated by textbook methods for crop water requirements, summed for all pixels inside the irrigated area. These potential water savings from irrigated areas were then allocated to neighboring rainfed areas, using an allocation procedure that reflects the suitability of areas surrounding an irrigation perimeter to benefit from a possible water allocation. The criteria used were based on distance from the irrigated perimeter, slope, soils, and presence of forests. The scores obtained against these four criteria were combined in a multi-criteria evaluation using the principle of the most limiting factor. The results of the multi-criteria evaluation were retained in an 'Allocation Priority Layer' (APL) specific to each irrigated perimeter. Water was then allocated to the rainfed areas in an iterative process, first to the pixels with the highest scores in the APL, and as these filled up, to pixels with lower priority scores until the water bank for each perimeter was exhausted. In order to model the complex relationships between irrigated and rainfed areas, a Spatial Water Allocation Algorithm was developed as a stand-alone Visual Basic program operating on data layers consisting of climate surfaces, classified Landsat imagery and the SRTM digital elevation model. Three types of areas – areas irrigated in summer, forest areas and arable land – were identified using Landsat imagery, combined with supervised classification methods. Forest areas were considered a prohibitive constraint, whereas the land use category 'arable land' was, in the absence of good soils maps, a proxy for'suitable soils'. This modeling exercise suggests that Syria has a large potential for supplemental irrigation by shifting from a fully irrigated summer crop to a partially irrigated winter-spring crop. This potential amounts roughly to a more than doubling of the area under irrigation at any given time. The methodology can be applied in other dryland areas without major modifications. The factors, decision rules and thresholds that determine suitability and water allocation priorities can be adjusted to local conditions. The data requirements include data layers related to precipitation and evapotranspiration, a digital elevation model, land use/land cover and soil maps, or, in their absence, these factors derived from satellite imagery. Future work will include testing of this methodology, and its incorporation into a decision-support system that allows user control in developing relevant scenarios for change, which may differ from place to place.