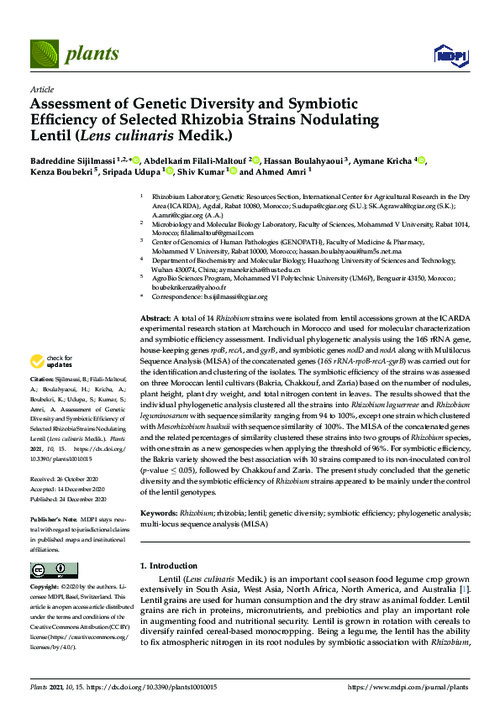 A total of 14 Rhizobium strains were isolated from lentil accessions grown at the ICARDA experimental research station at Marchouch in Morocco and used for molecular characterization and symbiotic efficiency assessment. Individual phylogenetic analysis using the 16S rRNA gene, house-keeping genes rpoB, recA, and gyrB, and symbiotic genes nodD and nodA along with Multilocus Sequence Analysis (MLSA) of the concatenated genes (16S rRNA-rpoB-recA-gyrB) was carried out for the identification and clustering of the isolates. The symbiotic efficiency of the strains was assessed on three Moroccan lentil cultivars (Bakria, Chakkouf, and Zaria) based on the number of nodules, plant height, plant dry weight, and total nitrogen content in leaves. The results showed that the individual phylogenetic analysis clustered all the strains into Rhizobium laguerreae and Rhizobium leguminosarum with sequence similarity ranging from 94 to 100%, except one strain which clustered with Mesorhizobium huakuii with sequence similarity of 100%. The MLSA of the concatenated genes and the related percentages of similarity clustered these strains into two groups of Rhizobium species, with one strain as a new genospecies when applying the threshold of 96%. For symbiotic efficiency, the Bakria variety showed the best association with 10 strains compared to its non-inoculated control (p-value 0.05), followed by Chakkouf and Zaria. The present study concluded that the genetic diversity and the symbiotic efficiency of Rhizobium strains appeared to be mainly under the control of the lentil genotypes.