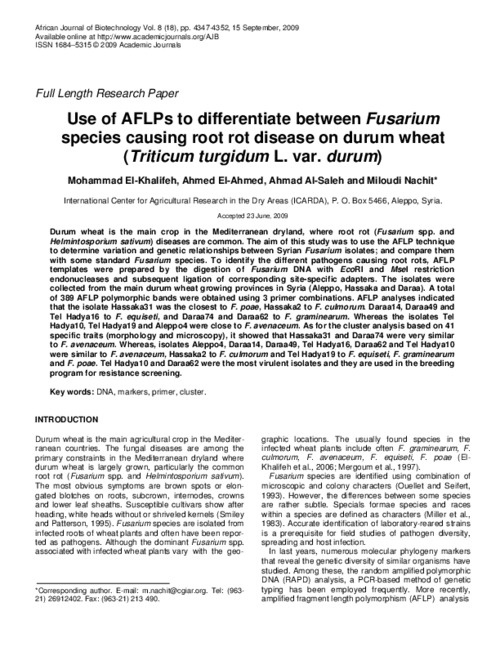 Durum wheat is the main crop in the Mediterranean dryland, where root rot (Fusarium spp. and Helmintosporium sativum) diseases are common. The aim of this study was to use the AFLP technique to determine variation and genetic relationships between Syrian Fusarium isolates; and compare them with some standard Fusarium species. To identify the different pathogens causing root rots, AFLP templates were prepared by the digestion of Fusarium DNA with EcoRI and MseI restriction endonucleases and subsequent ligation of corresponding site-specific adapters. The isolates were collected from the main durum wheat growing provinces in Syria (Aleppo, Hassaka and Daraa). A total of 389 AFLP polymorphic bands were obtained using 3 primer combinations. AFLP analyses indicated that the isolate Hassaka31 was the closest to F. poae, Hassaka2 to F. culmorum. Daraa14, Daraa49 and Tel Hadya16 to F. equiseti, and Daraa74 and Daraa62 to F. graminearum. Whereas the isolates Tel Hadya10, Tel Hadya19 and Aleppo4 were close to F. avenaceum. As for the cluster analysis based on 41 specific traits (morphology and microscopy), it showed that Hassaka31 and Daraa74 were very similar to F. avenaceum. Whereas, isolates Aleppo4, Daraa14, Daraa49, Tel Hadya16, Daraa62 and Tel Hadya10 were similar to F. avenaceum, Hassaka2 to F. culmorum and Tel Hadya19 to F. equiseti, F. graminearum and F. poae. Tel Hadya10 and Daraa62 were the most virulent isolates and they are used in the breeding program for resistance screening.